By Patrick Schmitt
in Fitness and Health

Don’t give up wine when looking to lose weight – it may help you shed the pounds; that was the message from a professor of nutrition during a webinar last month.

Addressing attendees during a virtual event called ‘Wine and weight management – is it possible?, Prof. Rosa M. Lamuela-Raventós began by answering the question posed by the webinar, saying, “It is possible, and I’ll explain why.”  Lamuela-Raventós, who is a professor at the Barcelona University’s Department of Nutrition, Food Sciences and Gastronomy, went on to show that moderate wine consumption is not correlated with weight gain, while revealing new evidence to show that red wine can help you to burn calories in food when drunk during meals, while offering a range of health benefits too.

She also told the audience why the term ‘empty calories’ was misleading when used to describe wine, which contains a range of beneficial minerals, vitamins and polyphenols.

Beginning the webinar – which was organised by Wine in Moderation – she pointed out that there is a growing proportion of the global population who are classified as obese, a state that’s reached if your Body Mass Index (BMI) is 30 or higher, noting that a BMI below 25 is normal or underweight, and 25-30 is overweight.

“Every year we see that there are fewer people with normal weight and the number with obesity is increasing, which is a worry, particularly among children,” she said, adding that, “The problem with obesity is the illness that obesity increases” – mentioning Type 2 Diabetes as “one of the worst”, along with heart disease, and associated “psychological problems”.

Importantly, the combination of a rise in obesity, and a sense that alcoholic drinks provide ’empty’ calories, has led wine to be eliminated from a weight-loss diet.

But what is the incidence of obesity and level of cardiovascular risk among wine drinkers? To answer this question, initially she drew on the results of a study called PREDIMED (Prevención con Dieta Mediterránea), which was a pioneering nutritional trail focused on the long-term effects of the Mediterranean diet among almost 7,500 randomised participants – the outcomes of which were published in 2013.

Having looked at various elements of the study, she noted that the wine drinkers profiled did not eat a healthier diet than those who did not drink, but nonetheless those who consumed wine had a decreased heart rate, and a lower BMI when energy consumption was the same as the non-drinkers.  This was true of those who drank very little (1-6 units per week), and those who consumed more than 14 units per week, although the results were best among moderate wine drinkers, who were those having 7-14 units of wine per week.

It was also true that wine drinkers, particularly those having between 7 and 14 units per week, had a lower number of cardiovascular risk factors compared to non-drinkers, which was measured by looking at glucose tolerance and triglycerides levels among the participants

As for cholesterol, she said there were no changes in levels, while she observed that the wine drinkers studied were consuming more calories, but not putting on more weight, having stressed that, as mentioned above, the drinkers in the research were not having more healthy food, so this was not due to a better diet.

Lamuela-Raventós then drew attention to a further issue to consider when looking at wine consumption and health, which related to when and how you drink.

Using evidence from a Brazilian study considering the timing and type of alcohol consumption and the Metabolic syndrome (which is a medical term for a combination of diabetes, high blood pressure and obesity), she showed that moderate wine consumption had a “protective effect” in terms of reducing the risk of cardiovascular disease and diabetes when drunk with meals, but a “neutral effect” when drunk outside.

The study, which involved more than 14,000 participants, states: Drinking predominantly wine, which occurred mostly with meals, was significantly related to a lower syndrome prevalence; drinking predominantly beer, most notably when outside of meals and in larger quantities, was frequently associated with a greater prevalence.

The professor of nutrition then said that she was working on a study due to be published soon that used tartaric acid – the main acid present in wine – as a ‘biochemical marker’ measured in urine to show the level of wine consumption in a group of 215 post-menopausal women, who she said generally have a high BMI.

Although the results are yet to be written up in full, she said that there was “no increase in BMI, weight or waist circumference in those having more wines, and there was less cholesterol – so, she added, “there was no effect on weight, and they had better biochemical parameters, which means there is no problem to have a light to moderate wine intake per day on your weight, and you can have better biochemical parameters.”

So what is it about the moderate consumption of wine that gives rise to health benefits?

For Lamuela-Raventós, the answer may lie with the polyphenols present in the drink, red wine in particular.

Commenting that alcoholic drinks are referred to as ‘empty calories’ she said “I don’t agree with that”, adding, “the main component in wine giving calories is ethanol, but wine also contains minerals, such as potassium, and it has polyphenols, and a diverse range, there are more than 75 kinds, from anthocyanins to flavonoids, and the most famous, which is resveratrol (see list of wine components below).” 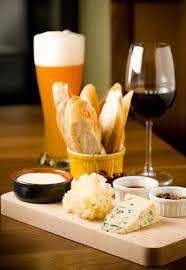 While beer contains some polyphenols such as resveratrol, the highest concentrations among alcoholic drinks is found in wine, particularly reds, with a ‘standard’ 100ml measure containing 200mg of polyphenols, and white wine around 30 mg.

Crucially, a natural phenol such as resveratrol helps the body increase the amount of brown tissue produced in the body, according to Lamuela-Raventós, which is a type of ‘good’ fat that turns food into heat, which “helps you to burn more calories in food,” she said.

This process, called thermogenesis, promoted by polyphenols, means that the body is not only counteracting the calories consumed in the wine, but also burning more in the food being eaten too.

Not only that, but the polyphenols present in wine “improve our gut microbiota, which is something that is taking on more importance every year,” she said, in regards to the healthy functioning of the human body.

Acknowledging that polyphenols aren’t only present in wine, she said that a study looking at the key sources of these products among consumers in Spain showed that the although the level was highest in fruit and vegetables, it was followed by wine, which contained more polyphenols than olive oil or nuts – both common parts of the Mediterranean diet.  Furthermore, she said that the polyphenols found in wine were “very bioavailable”.

Returning to the PREDIMED study, she said that it has shown a correlation between those consuming more polyphenols in their diet and a lower incidence of cardiovascular events, and “less mortality”.

Concluding, she said that “a higher intake of foods rich in polyphenols, such the ones that are present in red wine, seem to contribute to weight maintenance,” while reiterating that “wine consumption is not associated with weight gain.”

She also said that “Better cardiovascular health parameters are observed in wine consumers,” while saying, in summation, “Following a Mediterranean dietary pattern, including a glass of wine with meals, will support efforts of weight management.”

Finally, when asked whether the benefits of moderate wine consumption were still observed with a Western, as opposed to a Mediterranean diet, she said, “If you don’t have a healthy diet, and include wine, then it is better; with a Mediterranean diet, 25% of the beneficial effect is the wine, so if you don’t have a good diet and you include wine in moderation, then it’s better than not having any wine at all, unless you are pregnant or you have a liver disease.”

Earlier this year, a book was published by the former chairman of France’s National Cancer Institute, David Khayat, which urged people to enjoy sex and wine for the positive psychological influences these pleasures provide.
Called Arrêtez de Vous Priver (Stop Depriving Yourselves), the book promoted the message that people should have a “few small excesses, without feeling guilty”.

Noting that indulgences such as wine are necessary for a person’s self-esteem, Khayat said that the constant denial being promulgated by organisations, governments and some doctors are in fact harmful to the mind, while making little difference to the body.

So, taking into account the findings of Lamuela-Raventós, and views of Khayat, it appears that consuming red wine in moderation is good for the mind and body.

But, it should be stressed that last month’s webinar showed that to gain the maximum health benefits of wine, it should be red, and drunk during meals.