Harvest is on its way 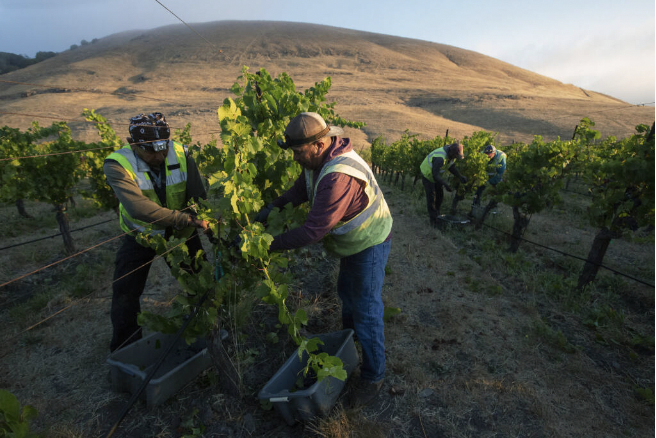 Workers of Gloria Ferrer Caves & Vineyards shared a cheers over sparkling wine to begin a new harvest season in Sonoma Valley Tuesday morning, showering the contents of their glasses onto to crates of glistening, freshly picked pinot noir grapes.

The tradition of pouring wine over the grapes, Hansen said to the group of employees, is to guide them to their next metamorphosis “so they know what to do next.”

Crews began pulling grapes from vines before the glow of dawn had a chance to touch the vines. Vineyard Director Brad Kurtz said the morning was uncharacteristically clear without the typical fog that rolls in during most days.

“One day down, 50 to go,” Kurtz said, adding the first day of harvest is focused on “getting everyone back in the saddle.”

The harvest came about a week earlier than in past years because of the lack of rain in January and February, paired with heat waves over the summer. The various patterns of weather this year, Hansen said, is something he’ll leave to the “weather guys” — he’ll focus on the grapes. 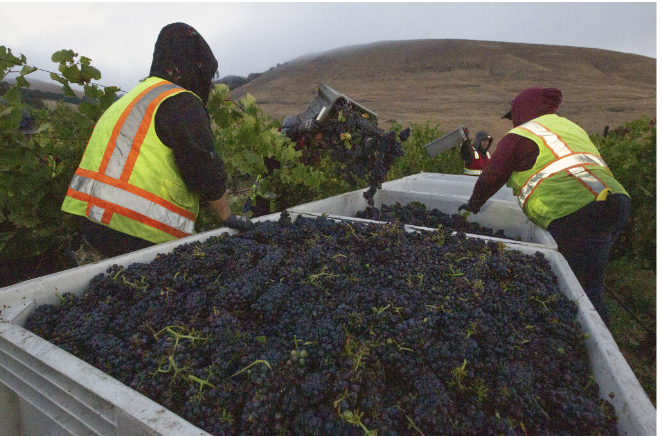 Viticulture science has made leaps since Hansen’s first harvest, and he has added two graduate degrees over that time to further Gloria Ferrer’s excellence and bring new sustainable practices to its winemaking. Still, no amount of education compares to the knowledge gained from sifting among the vines and soil.

“The more I do this, the more time I spend out in vineyards,” Hansen said. “Are they ripening evenly? Are they developing grape flavors? … That’s not information you can get sitting in a chair in an office.”

Soon, after ringing the bell to mark the beginning of another harvest season, forklift operators began the process of crushing 20 tons of pinot noir grapes collected that morning to ensure freshness.

The grapes traveled up along a conveyor belt to the three grand crushing machines, where they would be pressed, pounded and pulverized before being drained into studio-apartment-sized tanks for aging.”