Dan Berger On Wine “Regional character — Why it matters for consumers”

U.S. appellations, as they pertain to fine wines, can mean a lot or nothing. This clearly means that some appellations are consumer-friendly and helpful, but others offer nothing except confusion.

One of the most important American Viticultural Areas (AVAs) is Napa Valley, of course, but the story then gets really complicated.

Some AVAs are meaningful for specific grape varieties. Others are just geo-identifiers. One could make a strong case that New York’s Finger Lakes district is one of the most eloquent appellations in the country because of its wide success in the production of dry and off-dry Rieslings.

But many appellations offer consumers no assistance, regardless of grape variety.

Napa Valley is the most famous appellation in the country, maybe the world. It’s here that about half the vines (~20,000 acres) are Cabernet and the wines it makes have a worldwide reputation for excellence.

Not only did it pave the way for 16 AVAs within Napa, but it also did something I never realized until much later. Because Carneros was so large (today it’s over 1,100 planted acres) it helped usher in a trend that has made some AVAs a lot less meaningful than they might have been had then been smaller.

With AVAs, smaller is more meaningful. The larger an appellation is, the less likely it will be helpful to consumers.

For the last 35 years, I’ve witnessed many internecine battles by well-meaning but often self-absorbed wine people as new AVA boundaries were debated, not always in restrained tones. Invariably such disputes were settled with compromises that weren’t always in the best interests of the wines or dedicated consumers. In some cases, boundaries were expanded to accommodate someone wanting in who wanted a marketing advantage.

Of dozens of examples, one should suffice.

Fog-impacted Russian River Valley is large and sprawling. Sonoma County wineries often think of it in thirds layered south to north. The southerly strip, once largely dairyland, is coolest; Middle Reach is cool, but the climate varies and includes a few warmer pockets. The northernmost chunk is even warmer – and controversial.

Some people think the three areas should be three separate AVAs.

Although cool-climate Chardonnay and Pinot Noir both do well in the upper third of RRV, parts of the northern sector are warm enough to ripen Cabernet, hardly typical of the rest of RRV. And disputes over much of the area’s boundaries long have simmered without much accord.

Wine lovers prefer appellations in which there is at least one identifiable and even perhaps unique weather or soil feature. Russian River Valley’s primary one is fog. Pinots lean aromatically toward aromas of strawberry and raspberry. Nearby Sonoma Coast Pinots, not as distinctive, are slightly more cherry-like.

Cab-centric Napa is saddled with a curious situation. It is universally praised for the quality of its Cabernets, but no one has ever defined, in even a cursory way, what each of its 16 sub-appellations does best with it. In theory, the wines should display regional elements distinct from one another.

Without regionality, it would be as if all Napa Cabs were like all other Napa Cabs. But this wasn’t the case 30-odd years ago when I tried to identify what distinguished them.

I had long noticed differences between what grew in the Stags’ Leap District, Rutherford, Howell Mountain, Mount Veeder, and others. I wondered, “Are there identifiable distinctions to each of those districts’ Cabs?”

I called the Napa Valley Vintners and told them of my intention to test this idea. I was shocked when I was told that the vintners’ group had no interest in assisting me. They didn’t want to know how one district differed from another.

Someone there told me that the “brand” it promoted was “Napa Valley,” and that sub-AVAs weren’t in competition with one another. I replied that my aim was not to find out which sub-AVAs were better, only to see which offered specific elements to assist buyers in better understanding one from another.

Sort of like Classified Growth Bordeaux. Left to my own devices, I staged several blind tastings, one important one involving 10 widely skilled wine tasters. I assembled 26 wines under strict rules (only 100% Cabs, no blends; all from one sub-AVA). Using a carefully designed “identifier template,” I staged a multi-hour analysis of the wines at a St. Helena restaurant, and tabulated the results. Other tastings followed.

At the tasting, the judges, all experts on Napa Valley sub-regions (including Tim Mondavi and Dr. Barney Rhodes), were told that quality was not a criterion in the test. The judges merely had to guess each wine’s sub-AVA based on their expectation of what each area did best historically, focusing on known regional elements then existing in the Valley’s Cabs.

Judges “wagered” between 1 and 5 points per wine as they guessed which region a wine was from. A 5 was absolute confidence. A positive wager gave each wine that number of “regional identity points;” a negative guess removed the same number of points from the wine’s final total. Thus, a score of zero was some validation of regional identity to experts.

Crucially, no discussion was permitted during the evaluation.

Of nine sub-appellations represented in the blind tasting, only one area emerged with a positive score, Stag’s Leap District. That was an impressive validation that experts could agree that, at least in theory, sub-AVAs could have meaningful identifiers. Almost as impressive, Rutherford came out with a score of zero — also validating that it delivered some identifiers that could help consumers. All the other wines had negative scores.

Shortly after writing an article about this test, I chatted with the late John Shafer of Shafer Vineyards about the panel’s findings. We agreed that Napa districts could benefit from a comparison of Napa sub-districts similar to those in Bordeaux.

Bordeaux lovers routinely contrasted the differences between the wines of St.-Estephe, Pauillac, Margaux, and other sub-areas.

Weeks later, I discussed this with Stag’s Leap Wine Cellars’ founder Warren Winiarski. I asked if he would work with me on a book on his district’s unique ability to produce wines of a silkiness and a gentle-tannin early enjoyability without sacrificing age-worthiness.

Winiarski agreed. So I began creating an outline for such a book and began looking for a publisher. After months of homework, in the mid-1990s it was clear that things were changing rapidly.

I began to notice that several Napa sub-AVAs, including Stags’ Leap, were losing the key elements we had seen in our blind tastings. I called Warren and expressed concern. He said he had some hesitation as well. I think he knew that most Napa Cabernets were becoming more “impressive,” to the delight of those making the wines, which were rising in price well beyond anything they ever imagined.

And the main reason for rising prices was high scores, which were directly related to high alcohols, high oak extracts, lower acidities, and other factors anathema to regional identity.

Conversations with several winery owners led me to believe that although high scores from some wine critics were beneficial to rising prices, they often displayed a sotto voce melancholy that the new, higher level of intensity related to much later harvesting of the fruit, which gave the wines more homogeneity and sameness.

One who was outspoken about this was the late Joe Heitz, though his remarks were spoken “off the record.” Decades later, I suspect Joe wouldn’t mind me revealing this!

Many wines from many different sub-AVAs in Napa began to smell and taste pretty much like each other and regional distinctions were not only blurred but obliterated. This clearly was directly linked to the quest for high scores. Not to mention giant AVAs. 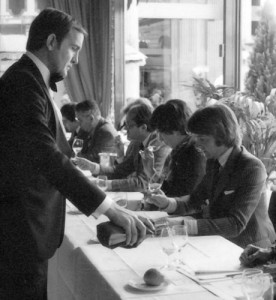 One of several problems with scoring wines by numerical ranking is that there are no parameters to justify how the points are arrived at. If reviewers completely ignore regionality, and scores continue to rise, then no one learns anything about how a region influences a wine’s style. Big gets high scores, high scores sell wine, and regional character is left in the actual dust.

In chatting with Winiarksi, I said that the trend toward weight made most sub-regional discussions moot. Over the next few years, I saw Napa Cabs in a new light. Concentration levels were up. Alcohols, which had regularly been 13.5% a decade earlier, had moved to 15% and more.

Acid levels were down. And most importantly pH levels were rising absurdly, signaling that the wines likely would age about as well as a Mayfly.

Napa’s sub-region Cabs were changing while wineries benefited financially from the drink-now culture that was happy to ignore the region’s history of aging its greatest reds. Cabernet was being called a cocktail wine, for sipping while walking around. A wine columnist even wrote a column that contained the line, “Drink ‘em Young.”

The style that put Napa on the map was in jeopardy and so was the meaning of sub-districts. I saw the blurring of regionally distinguishing styles as a repudiation of the entire concept of sub-appellation.

To use one old example: What is a Rutherford Cabernet Sauvignon?

André Tchelistcheff, probably California’s greatest winemaker, once described his Beaulieu Cabs’ aromas as having a hint of Rutherford Dust. It’s a descriptor that André used to describe a delicate herbal note (not unlike dried sage) that I often relate to the “cigar box” notes we’d find in southern Napa Cabs (from Oak Knoll, Yountville, Oakville) as well as in some Bordeaux.

Similarly, I once regularly found Cabs with hints of Latakia tobacco. I haven’t smelled that in a Napa Cabernet in 30 years!

André’s “dust” wasn’t earth from the ground. It was from dried herbs. Imagine walking through a dry, wooded area with eucalyptus nearby, some weeds and dry undergrowth kicking up the scents of brush – thyme, rosemary, sage.

Because such scents are herb-related, wine newcomers often mistake it for a flaw. Most major U.S. wine reviewers use the odious term “weedy” to describe this, without being aware that it is an absolutely essential component of a fine Cabernet Sauvignon – if the wine is to smell and taste like a Cabernet Sauvignon!

For me, a Cabernet without any herbs is not Cabernet. Yet some wines that smell like vintage Port get scores of 99 or 100! (Similarly, if a Merlot is to smell and taste like Merlot, it should have Merlot-like elements – black olives, green or black tea, dried cherries. Almost all grape varieties have hints of herbs of one sort or another, and not all such wines with these characters deserve being derisively called “weedy.”)

Today, as we begin to see the early releases of some 2018 Cabernets, most of which are far too young to drink, it’s a good idea for consumers to recall that the vintage was relatively cool, and as such some of the wines may display a bit more herbaceousness (tarragon?).

To me, this means that the wines probably will be more Cabernet-like than were the 2017s. And some may be classic examples of older-style Napa Cabernet.

If a wine is from a sub-region, maybe we’ll get lucky: some wines may display sub-regional-ness.