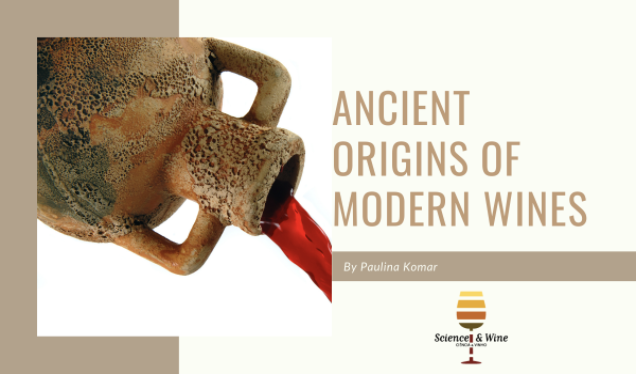 Spread the love By Paulina Komar

Wine was being made almost 8.000 years ago! The earliest known wine remains, which were discovered in clay jars from the South Caucasus in Georgia, have been attested by chemical analysis to date to ca. 6.000–5.800 BCE. This agrees with climatic and environmental reconstructions, as well as with archaeobotanical evidence, which points to Georgia being the cradle of viticulture and wine making (McGovern et al. 2017). Not far from Georgia, in the Zagros Mountains in northwestern Iran, wine remains dated to ca. 5.400 BCE have been preserved in pottery vessels together with traces of resin, which might have been added as a preservative (McGovern 2003). This suggests that early Iranian wine had a similar taste to the Greek retsina of today, to which pine resin is added during the fermentation process. Does this mean that all ancient wines had this resin-like taste? Not necessarily! The ancient written sources, when approached from an oenological point of view, suggest that ancient Greek and Roman wine makers were quite advanced, as they could produce many of the drinks that we know today.

There is a high probability that ancient Greeks and Romans were able to produce wines that tasted like modern vins de voile (vins oxidatifs), such as Spanish sherry of the fino type, Hungarian Tokaji (Szamorodni type), or French vins jaunes (yellow wines). These wines mature under a layer of surface yeast (Saccharomyces cerevisiae) called flor (flower) in Latin and Spanish, ἄνθος (flower) in Greek and voile (sail) in French, which occur naturally in grape skins. During the process of oxidation certain chemical compounds appear, such as sotolon, which is responsible for the specific and slightly spicy taste of these wines that has been compared to fresh bread, roasted walnuts or, in the case of a high sotolon content, curry. Interestingly, these wines are white, but because of the long maturation process they gain a very dark yellow or even orange hue, additionally they must be strong as the film of yeast is only formed when the alcohol content oscillates between 14.5 and 16%. In weaker wines acetic fermentation occurs, unless it is artificially stopped (Robinson 2006, 275, 750).

In antiquity Greek wines from Lesbos, Chios and Thasos were the most famous for being dark yellow, old, strong and fragrant and there are a number of literary references to the maturation under the film of superficial yeast. One of these is provided by Archestratos of Gela, the author of the earliest preserved cookbook, who mentions wine from Lesbos having its head covered with white flowers (Archestratos Fr 59 Ri). These wines are also quite often called ἀνθοσμίας (e.g. Longus 4.10.3) and were mainly consumed by ancient aristocrats, which included Hellenistic kings as well as Roman politicians and generals, e.g. Lucullus and Cesar (Komar 2014, Komar 2020 Chapter 2). 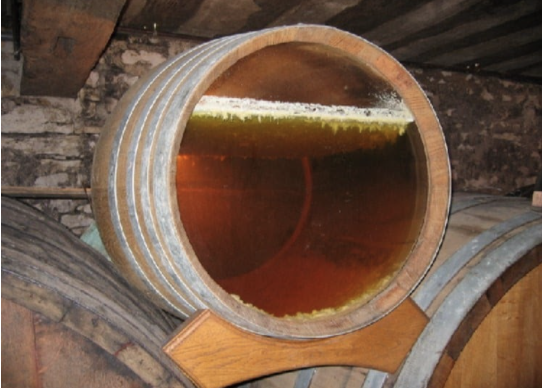 Sotolon can also be produced in wine which is artificially heated as in the case of modern Madeira wines. Maderization is used mainly in Spain and Portugal and it consists of accelerating the oxidation process by keeping wine at an elevated temperature – in the case of Madeira this lasts about 4-5 months at 40°C. Heavy and strong wines with an alcohol content of between 16 and 18% are suitable for maderization, which according to an anecdote was invented in the 18th century by accident whilst shipping wines to India, which acquired a new taste and other desirable characteristics due to being exposed to the sun (Robinson 2006). Interestingly, the Romans and Greeks also used a form of maderization, which entailed keeping the wine in the sun or in a special room above the hearth, so that the smoke from it would warm the drink. Additionally, references to “smoke wines” appear quite frequently in the Roman sources and fumaria – places for heating wine above the fireplace are quite common in Italy and Gaul. It seems, however, that heating wine was considered to be an artificial aging process, and drinks that were made in this way did not have the best reputation, at least according to ancient physicians. The most famous Roman vintages, such as Falernian, Caecuban and Albanian wines (Tchernia 1986), were not subjected to such practices – Pliny advised against heating them (Plin. HN XXIII 40).

Today, the most famous vina passita are of course Italian, for example the Tuscan Vin Santo or the Venetian Amarone. However, in antiquity, the island of Crete stood out as a producer of raisin wine, called γλυκύς by the Greeks and passum by the Romans. This drink was so sweet that, according to medical texts, it could replace wine mixed with honey, or even honey itself in the production of various medicaments. Martial calls Cretan passum ‘honeyed wine for the poor’ (Mart. XIII 106), which suggests that it must have been fairly cheap and not only available to the elite. This is interesting information, because modern vina passita are more expensive than ordinary vines, because more grapes are used to produce it. In Rome, however, wine from Crete was the most common import (Tchernia 1986). Outside of Crete, raisin wine was also produced in Asia Minor and North Africa (Plin. HN XIV 73, 78-79).

Can you imagine a stranger drink than wine with seawater? Ancient Greeks were famous for making such wines, called τεθαλασσωμένοι, while the Romans commonly imitated them (Cato, Agr. 24, 105, 115, 158). They were produced mainly on Kos and Rhodes, as well as in western Asia Minor in the area famous in antiquity for its salt trade (Plin. HN XIV 73, 78-79). What was the purpose of adding sea water to wine? The Greek chemist and enologist, Kourakou-Dragona explains that the soil in these areas is very fertile and therefore vines that are grown there produce lots of grapes. However, the low sugar content in these grapes results in weak and watery wines, which are unsuitable for long-distance transport and long-term storage because they turn into vinegar as a consequence of oxidation. The addition of seawater stopped acetic fermentation and it could also help to clarify the liquid (Kourakou-Dragona 2013, 123-124, 127, 133-134). Now, this ancient practice is abandoned as there are other ways to stop undesirable processes in wines, but it continued to be used in Greece until the 50’ of the 20th century!

As you can see, many modern wine making methods were already known in ancient times! 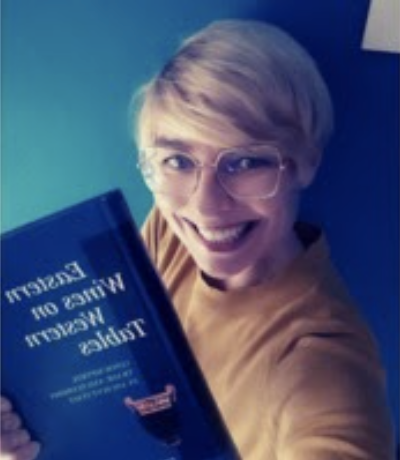 Paulina Komar has an MA in Archaeology, as well as an MA in Journalism and Social Communication from the University of Warsaw. Her PhD, entitled “Consumption of Greek wines in Roman Italy” was written within the framework of the international PhD project “The Eastern Mediterranean from the 4th century BC until Late Antiquity”, which was financed by the Foundation for Polish Science. She completed a postdoctoral fellowship at the Jagiellonian University in Krakow thanks to a research grant from the Polish National Science Centre entitled “Greek Wines in Italy: Consumption, Distribution, and Social and Economic Aspects”. She received the Fulbright Senior Award 2020-21 as well as a scholarship for outstanding young scientists from the Polish Ministry of Education and Science, she has also authored the book “Eastern wines on western tables: consumption, trade and economy in ancient Italy”. Her interests include wine consumption, trade, and the economy in the ancient and Byzantine world, with particular emphasis being placed on transport amphoras that were produced in the Mediterranean and Black Sea regions. She is currently working on a project entitled “Market economy or oriental bazaar? The nature of the Roman economy based on the distribution of amphoras in Italy”, which is financed by a grant from the Polish National Science Center. She has participated in numerous archaeological projects both in Poland and abroad, which include excavations in Peru, Sudan, Montenegro, Georgia, Italy, Cyprus and Croatia. She is currently cooperating with the Paphos Agora Project in Cyprus and the Polish-Georgian Gonio-Apsaros Archaeological Expedition in Georgia.