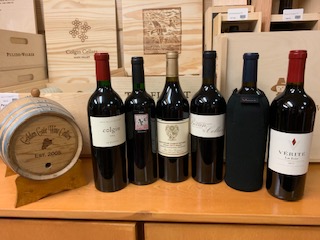 Last week Saturday, February 16, a group of about 30 people eagerly lined up to taste a selection of some of the most sought after California “Cult” Wines.

We tasted the following “Cult” Wines:

A Statement of sorts… Wine #1 and # 2 were the least expensive out of the bunch, and the group all agreed – the best!  I have a little of both in stock if you want to order some!

This was the fourth Cult Tasting we’ve done in our store. Because of the success next year we might need to turn to a larger venue, as I cannot accommodate more people in my tasting room. Stay tuned.