My tasting group of 12 brought in a nice selection of 2014 Chardonnays from Oregon and California. The impressive lineup included:

The surprise winner –  Bethel Heights “Casteel” which garnered 7 of the 12 first place, 3 second and 2 third place votes from our panel. Paul Lato received 4 first, 5 second and 3 second place votes followed by DuMol “Estate they received 1 first, 2 second and 6 third place votes.   Very surprised that Kistler, Ramey and Littorai came in at the bottom of the pack.  That is the great thing about doing blind tastings! 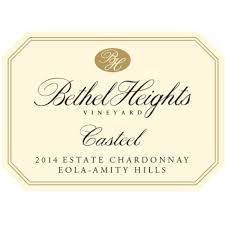 In 1977 Ted Casteel, Pat Dudley, Terry Casteel, and Marilyn Webb abandoned the academic life and bought 75 promising-looking acres northwest of Salem, with 14 acres of newly planted cuttings in the ground. In 1981 they harvested their first crop and started home winemaking in Terry’s basement. In 1984 they produced their first commercial vintage, and now the second generation has taken over the reigns!

Winemaker Notes: “Our 2014 Casteel Chardonnay opens with aromas of preserved lemon, brioche, white pepper and fresh ginger. The palate is both graceful and energetic, displaying the tension of a wine that will age gracefully over the next 8 to 10 years.”

Robert Parker 94 Points: “The 2014 Chardonnay Casteel Reserve had just been bottled. It has a perfumed nose of white flowers and melted candle wax, very well defined with lime and frangipane aromas developing. The palate is well balanced with a crisp, citrus lemon and lime-driven opening. This feels spicier than the Justice Vineyard Chardonnay, gaining depth towards the finish that has a bit of fire in its belly. This is a very well-crafted Chardonnay that should age with style.”

Click here or on the above links to order!