In the 1960’s the estate was merely raw land without access roads or utilities. On weekends Don and his wife Anne, would hike up roughly 1,000 feet from the Silverado Trail below to picnic under the large oak tree that still stands in the vineyard in front of the winery. While sitting on their blanket enjoying a glass of wine, Don would envision harnessing the hillsides potential to cultivate world-class grapevines.

In 1978, Don’s vision came to fruition when he and his 28-year-old son David Arthur Long built a small barn and began planting grapevines. After seeing the excellent quality of the fruit growing in the vineyards David received his father’s permission to convert the small barn into his own winery, naming it David Arthur Vineyards. The winery’s inaugural release was the 1985 vintage, which coincided with the birth year of David’s daughter Laura Annalyce Long. 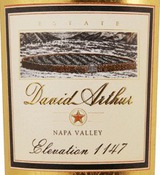 Anthony Galloni 96 Points: “The 2014 Cabernet Sauvignon Estate Elevation 1147 is subtle, nuanced and polished. Silky tannins give the 2014 much of its supple, inviting personality. The Elevation is the most accessible of the 2014 Cabernets. In 2014, the Elevation has a bit more density than normal, but the style is one of restraint, as is the case with all of the wines here. Sweet red cherry, tobacco, spice and leather add aromatic intrigue, while the 100% new French oak adds mid palate sweetness and depth.”