A new analysis of medical research finds that a nightly glass of wine with your dinner could be helping protect your brain from the risk of developing dementia. But scientists have yet to agree on why. 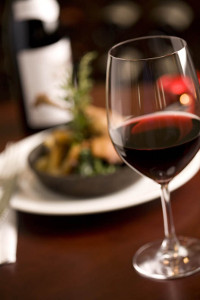 For several years, researchers have examined alcohol’s potential effects on the risk of developing dementia—both positive and negative. Many recent studies have found that moderate alcohol consumption can have a protective effect, but due to different methodologies, theories and the sheer number of studies out there, deciphering what it all means can be a bit tricky.

The main conclusion of the study supports the idea that light to moderate alcohol consumption—one drink per day or less, according to this analysis—confers a lower risk of all-cause dementia than total abstinence. On the other hand, the researchers found that the risk for dementia was higher for those who consume more than three to four drinks per day, or 23 drinks per week.

A closer look at the results shows more good news for wine lovers: Of the studies analyzed, seven addressed the type of alcohol consumed, and the analysis concluded that wine (consumed in light to moderate amounts) was the only alcoholic beverage that appeared to possess notable protective effects against dementia. Heavy beer drinkers appeared to suffer a higher risk of dementia.

Why does wine protect the mind? The International Scientific Forum on Alcohol Research (ISFAR), a group of scientists and researchers dedicated to analyzing alcohol and health-related studies, published a critique of the meta-analysis. Members of ISFAR, including medical practitioners, university professors and public health specialists, discussed potential explanations for the findings. One familiar theory: the anti-inflammatory and antioxidant properties of polyphenols in wine could be a contributing factor. 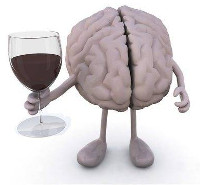 But members also suggested other mechanisms. Ethanol is believed to stimulate the release of acetylcholine in the brain, which leads to improved cognitive function. Another theory is that gallic acid, which the body produces when consuming red wine, can block the aggregation of beta amyloid in the brain. Those peptides are involved in the development of dementia.

Overall, ISFAR members commended the meta-analysis for its vast sample size and methodology, but asserted that there is still much more research to be done to understand the complicated relationship between alcohol and dementia.

So what does this mean for wine drinkers? “It’s pretty clear that people who drink wine [are] lowering the risk of developing dementia; what we were trying to do is see why this is true,” explained Dr. Curtis Ellison, codirector of ISFAR and professor at Boston University School of Medicine. “It’s the polyphenols in wine that seem to give it extra protection, and it’s probably that polyphenols work best with alcohol. [But wine] also evidently has mechanisms that are still poorly understood.”

Ellison, who studied wine’s health benefits with the “father of the French paradox” Serge Renaud, told Wine Spectator that the best way to reap wine’s benefits is to drink moderately, with food, throughout the course of the week. “We’re not saying to go out and drink to prevent dementia. However, if you decide that you’re going to have wine with your meal every night, you can know that you’re getting a side benefit.”