Not sure where to start, but the shortest way is to say that both Matt Taylor (former winemaker at Araujo) and Francois Morisette were cut from a similar cloth – both loved the gipsy way of live and travel.  Both lived around the world and were exposed to … wine!  Matt has some “movie fame” in his family.  His grandfather Mitch, a larger-than-life figure whom he greatly admired, owned “The Tides Wharf” in the town of Bodega Bay proper, and it was Mitch who gave Alfred Hitchcock permission to film “The Birds” in and around his hotel and restaurant. In return, Mitch got a speaking part in “The Birds”. Plug it all together and you have two crazy guys with a passion – W.I.N.E.! 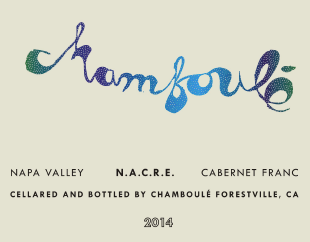 Robert Parker 94+: ”Coming from 37-year-old vines in the Coombsville area of Napa Valley and with a deep garnet-purple colored, the 2014 Cabernet Franc N.A.C.R.E. offers a pretty fragrance of kirsch, roses and raspberry leaves plus an earthy undercurrent of tree bark, moss and underbrush. Medium-bodied, the palate explodes with perfumed red berry flavors, supported by grainy tannins and a lively backbone, finishing long and earthy. 100 cases were made.”

Winemaker Notes: “The fruit for the 2014 Cabernet Franc N.A.C.R.E is sourced from Caldwell Vineyard and was harvested by hand based on skin maturity. The final harvest was sorted and transferred into open top oak fermentation vats and done 70% whole cluster. The wine was aged 18 months on primary lees in neutral Demi-Muids. The 2014 Cabernet Franc was bottled unfiltered and un-fined in March 2016.”