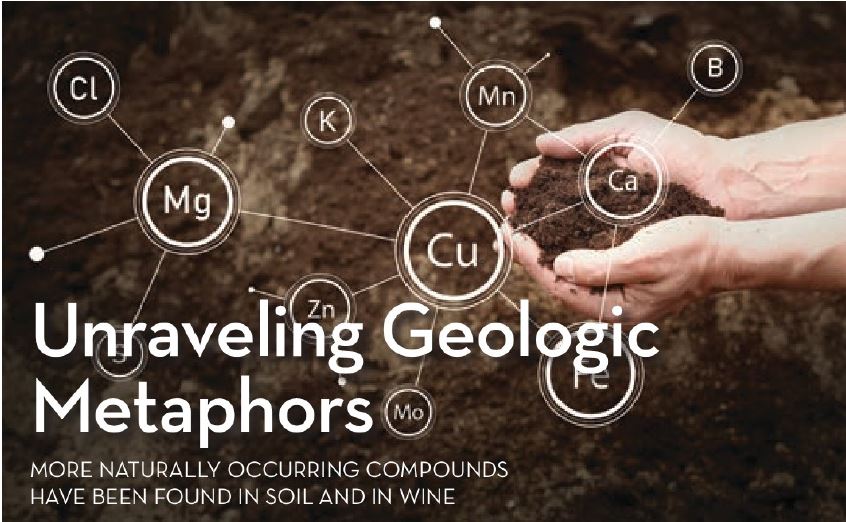 The discovery of more naturally-occurring compounds found both in soil and in wine prompts winegrowers to abandon their geologic metaphor and take credit for winemaking choices that reflect their terroir.

In addition to water and alcohol, wine is composed of fewer than 4% of minor components, many of which are only present in miniscule amounts. The dozen or so minerals that are present as nutrient elements—typically metallic cations (positively charged ions)—such as potassium, phosphorus, and calcium are only distantly related to geological minerals found in vineyards, which are complex crystalline compounds.

However, research is showing that some of the same volatile compounds
found in rocks can also be found in wines described as “mineral.” Although there is no single term for the source of mineral expression in wine, one thing wine professionals and consumers do agree upon is the use of certain words to describe such characteristics. Careful study of the lexeme for the word “mineral” has produced a list of relevant descriptors, including: flint, matchstick, smoke, kerosene, petrol, rubber eraser, slate, granite, limestone, earthy, tar, charcoal, graphite, rock dust, wet stones, salty, metallic, steely, and ferrous.

One of the most romantic yet misguided geologic metaphors employed by winemakers attributes mineral expression to the soil vines grow in. For example, flint and pebbles contain polysulfides and, more specifically, hydrogen disulfide, compounds that give them odors of flint, gunpowder, and matchstick.

Despite the widespread use of the term “flinty” to describe them, the odors of these sulfanes had previously never been studied in the context of food products—largely because the sulfanes are highly volatile and unstable, making them challenging to work with—until researchers who were studying toilet malodors realized they were on to something.

Flint is formed from sediments rich in hydrogen compounds as a result of the bacterial reduction of sulfates in an anaerobic environment. When it’s scraped or struck against another rock, the presence of iron from clay minerals releases those compounds as iron sulfides and other sulfur forms.

This is the source of the easily detectable gunflint odor that the winegrowers of Sancerre metaphorically assign to the aromas found in the wine that comes from the area’s silex soils. Flinty aromas in Sauvignon Blanc are attributed to benzene methanethiol (or reduction), but hydrogen disulfide can also play a role.  The above-mentioned researchers confirmed the presence of hydrogen disulfide in two dry white Chasselas wines that were described by wine professionals as the most mineral from among 80 samples.

When tested, in addition to containing this polysulfide, these wines were found to have higher concentrations of malic and lactic acid. While hydrogen sulfide is present to some degree in all wines, the compound hydrogen disulfide is more abundant in wines defined as mineral. Given its presence in both them and the soils they hailed from, the intrepid winegrowers of Sancerre can now revise their metaphor and take credit for winemaking choices that reflect their terroir.