The science of old vines 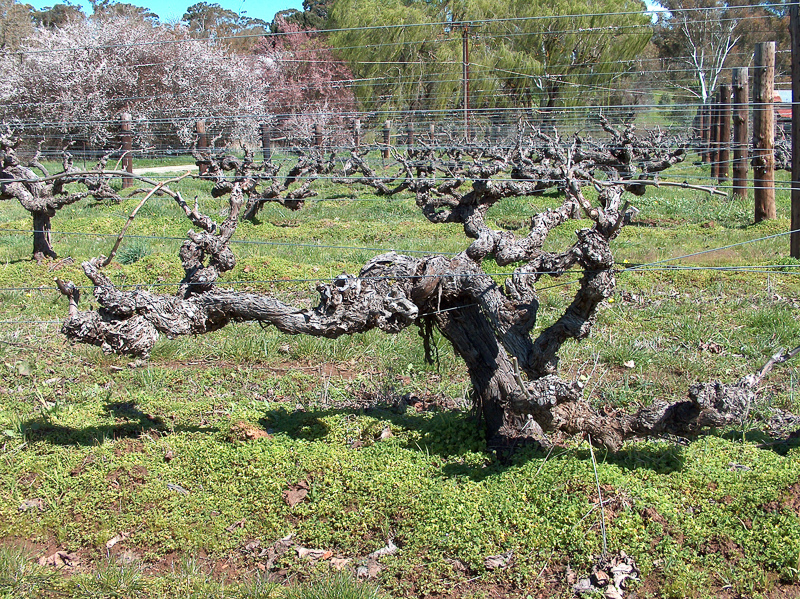 It’s wonderful to see an old vineyard. The vines, with their gnarly trunks, have been growing and producing grapes for a human generation or more. They are highly valued, and in many wine-producing countries there are now registers of old vineyards.

You’ll often see the phrase ‘old vines’, or ‘vieilles vignes’, or ‘viñas viejas’, or ‘vinhas velhas’ on the label, although this is not a regulated term. In South Africa, the Old Vine Project defines ‘old’ as 35 years. In Australia, the Barossa has an Old Vine Charter that starts at the same age, but then has separate tiers for survivors (70 years) and centenarians (100 years).

But what’s the science of old vines? They are widely credited with making better vines. Is this really true? And if so, what mechanisms are involved.

There are a number of suggestions. Skeptics say that there’s a confounding factor at play here: if a vineyard is in a great location and the vines are making excellent wines because of that location, they are unlikely to be pulled up, even when yields start to dip. Hence the vineyard becomes old, making excellent wine. There’s some truth to this, but I wouldn’t say this is the only explanation.
There’s the carbohydrate reserve hypothesis. Depending on the vigor of the site, old vine trunks can grow quite large. Their root systems can grow extensively, too. [Less vigorous sites can have old vines without impressively large trunks; more vigorous sites can grow big fat vines even by age 20.] These trunks and roots act as carbohydrate reserves. Early in the season, the vines rely on these reserves to get going, and grow leaves, and it takes quite a while until these leaves are generating more carbohydrates than their growth is requiring. So older vines have an advantage here because of their reserve capacity.

Then there’s the teenage hypothesis. The first crop or two from a new vineyard is often of very high quality. That’s because there’s a nice balance between foliage and crop load. Then, as the vine gets going it enters its teenage years, and starts producing a big canopy. It takes a lot of viticultural work – and smart work – to get the balance between canopy (the leaves and shoots) and fruit (the bunches of grapes) right. Then, as the vine enters adulthood and leaves its teenage ways behind, the balance comes back. It throws an appropriate crop (of course, depending on it being a good site) and the canopy grows enough to provide the photosynthesis necessary to ripen the grapes, but not too much that there’s excessive shading and a refusal to stop growing. In vigorous vineyards where the canopy grows too much, winegrowers have to pass through and trim it. This can encourage the growth of lateral buds which end up shading fruit. The vine really needs to stop growing more leaves at the right time so it can focus on ripening fruit: this is what old vines often end up doing, and could be one reason why they are prized.

Of course, we mustn’t forget about the roots. As a vine ages, the roots explore more of the soil. Of course, a lot depends on the nature of the vineyard soil and subsoil. But in an ideal world, these roots sink deep, providing access to a steady but limited supply of water, and also adequate nutrients. This means that old vines tend to be more consistent, and can cope with variations in seasonal conditions. As the roots go deeper, then the terroir is more likely to be expressed. Winegrowers I’ve spoken to say that often younger vines give lovely fruit expression, whereas once they reach the age of about 10, they see more terroir expression. The site begins to speak more clearly.

Now we get to some more esoteric, but potentially equally valid explanations. The first of these is about epigenetics, and it has best been explored by the PhD research from viticulturist Dylan Grigg. It’s hard to put into simple terms, but basically epigenetics is the way the environment writes itself onto the genetics of an organism. It’s not through changes in the DNA – this isn’t possible. But it’s through changes in the proteins that surround DNA in the nucleus, and cause some genes to be expressed or muted through alterations in packing material around the genetic code, such as histone deacetylases. Some of these outside-the-genetic (epigenetic) changes can even be heritable. They help a plant adapt to the environment, and Dylan has shown them to be present in old vines in the Barossa. Unfortunately, the evidence suggests that if you take cuttings from these venerable old Barossa vines the epigenetic changes are re-programmed. But if you propagate by layering, they can be preserved.

The second is an idea I’ve not seen applied to vineyards before, but which I’ve taken from studies of old growth forests, and it concerns the common mycelial network. We are just discovering that there is an unseen world living under our feet. Far from soils just being a medium for plants to grow in, there is now a realization that they are living. And this ecosystem is complex, and vital to how plants grow. Mycorrhizae are networks of fungi that live in association with plant roots – around 80% of plants have these symbiotic associations. They vastly expand the reach of plant roots, and the plants feed them with their photosynthates in exchange for the extended reach they get exploring the soil for nutrients. It has been shown, though, that these mycelial networks actually connect plants – even plants of different species. There is a sharing of resources, and also a sharing of alarm signals from attack by diseases or herbivores, allowing neighbors to switch on defenses. Suzanne Simard from the University of British Columbia made this wood wide web of common mycelial networks famous, and there’s every reason to suspect that it might also operate in established vineyards. We need more research on this. It’s also a good reason to care about soil health (cue regenerative viticulture).

Finally, there are a few other important areas of scientific research with regard to old vineyards. The first is grapevine trunk diseases, which are on the rise. Lots of old vineyards are being lost to ESCA, in particular, which has several fungal species associated with it. The cause of this rise? One suggestion is the widespread use of the omega graft since the mid-1970s, which has some issues with vascular conduction through the graft join. This is quite controversial. The second is because of the way that vines are pruned, with no respect for sap flow, and with cuts too close to the main trunk inducing cones of desiccation, where there is die-back from the cut that impacts on vascular tissue in the trunk. Then there is the threat to old vines caused by grapevine viruses. These are a significant problem, and where they are transmitted easily (for example, through mealybugs), they limit the life of the vine. Old vines are rightly prized. But ultimately, once a vine has passed its vigorous youth and has established a decent root system, the main factor is place. Some terroirs are simply better than others. Give me a 15 year old vine on a great site versus a 50 year old vine on the fertile valley floor any day. The discussion of the science of old vines continues.