By Jamie Goode
from WineAnorak 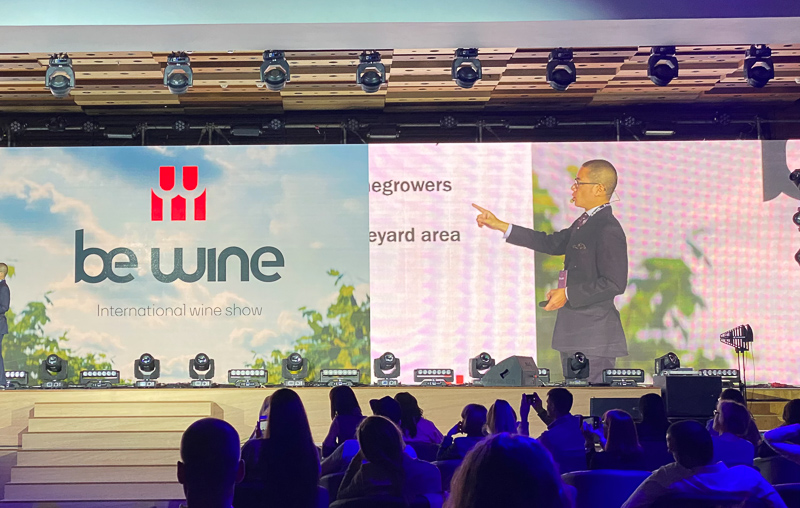 At the BeWine festival in Kyiv, Ukraine, Peter Liem was one of the headline speakers. He gave a thoughtful presentation on the state of play in Champagne, a region he is one of the top specialists in – and where he has lived over the last several years.

He began by discussing the diversity of soils in Champagne, and the subregional differences.

Everyone thinks of chalk when they think of Champagne’s soils, and it’s a region that is famous for its Cretaceous chalk bedrock, which is 65 million years old. But while this sits at the base of soil profiles here, predominantly chalky soils aren’t as common as people assume. In many vineyards, the chalk is often found quite deep below other soils that take prominence: the likes of marls, clays and sands.

Normally when we talk about champagne we talk about three major sub regions, but in his excellent book, Peter has devised a scheme of seven subregions that make sense. If you want to go even further, the CIVC has a scheme with 20 subregions. This is not a simple story, but it’s an interesting one, particularly if you want to parse out the influence of subregion on wine flavour.

When it comes to discussions of Champagne, it’s easy to jump on bandwagons. ‘Some people say they only drink only non-dosé wines or organic wines or wines from small growers,’ he says. ‘But this is too simplistic. It takes away from the real message of Champagne’s diversity.’ There are three key areas of misconception.

The first is the idea of growers or houses. ‘In the last 20 years there has been an incredible availability of grower champagnes,’ he says. ‘We see all sorts of smaller producers we didn’t have access to before.’ But along with this is the notion that the region can meaningfully be divided into big houses versus small growers. ‘In export markets especially, they are posed like they are in combat.’ However, the idea that big is industrial, while small is higher quality and terroir expressive is misleading. ‘If there’s one thing I’ve learned, in both Champagne and Sherry [another speciality of Peter’s], the size you work at has little to do with quality.

We have this cultural bias that small is automatically better, but being small or large isn’t related to quality.’ 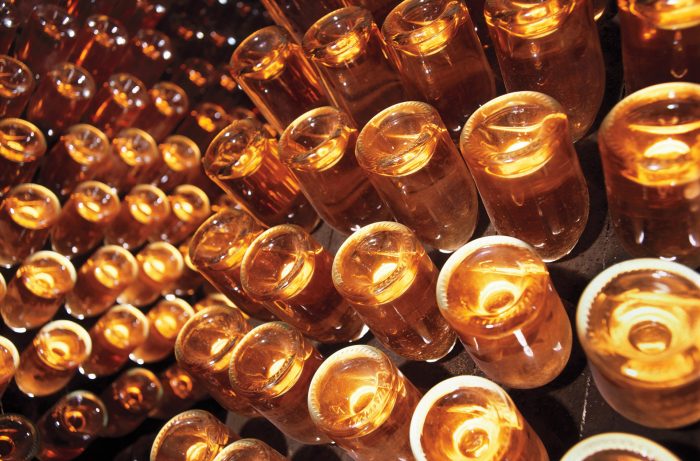 Peter does acknowledge that there could be an upper limit if a producer is making many millions or bottles, but he also points out that a number of quality houses top out at 2-3 million bottles. As examples he cites Louis Roederer (around 2.5 million bottles), Pol Roger (around 2 million) and Bollinger (around 2 million). ‘This is a nice area where you can make quality and quantity.’ However, he acknowledges that the Dom Pérignon 2008 we shared on Thursday evening was a fantastic wine, and that they probably made 5 million bottles of this. ‘We lovely the narrative of small family estates, but just because you are small it doesn’t mean you make good wines.’

Then he raised the distinction that is made between RMs (recoltant manipulant, growers who make wine solely from their own vineyards) and NMs (negociants). In the past a lot was made about the idea of RM – it’s the same idea as the small grower, it is not sensical

They are just business structures – it just means NMs have the ability to purchase grapes.’

The distinction between RM and NM is becoming more blurry, largely because land is so expensive. Vineyard land in Champagne costs a minimum of 1 million Euros per hectare, and Grand Cru land is 2-3 million per hectare. It’s not only that it is expensive, though, but also that there’s hardly any on the market even if you have the money to spend. Of a region of 34 000 hectares, in the entire year of 2019 only 56 ha became available. As a result, a lot of RMs are switching to NM just to grow their business.

If you insist on buying solely Champagnes from RMs, then there are some serious ‘grower Champagnes’ that you will miss out on: Bereche, Pierre Paillard, Emmanuel Brochet, Jacques Lassaigne, Pierre Péters, Jerome Prevot, Savart, Vilmart and Vouette et Sorbée are all NMs now. And if you look at Louis Roederer, all their vintage wines come from their 240 hectares of vines. If they didn’t make their NV, then they’d be the largest of the RMs.

Viticulture is also an area where Champagne is misunderstood. The perceived progression from conventional to sustainable to organic is very narrow. ‘We are looking for new ways to talk about responsible viticulture,’ says Peter. Champagne is often criticised for its viticulture, and people still talk about garbage in the vineyards dating back to the time when domestic waste was used as a fertilizer. And also because the region has a relatively small proportion of organically certified vineyards. But this doesn’t take into account the nature of the region of Champagne. It’s one of the most northerly wine regions of Europe – before climate change it was at the limit of viticulture in France – and it is famous for its terrible weather.

‘The reason there aren’t more organically certified producers is down to one issue,’ says Peter. ‘Downy mildew. It’s the scourge of Champagne every year.’ He explains that many of the best producers aren’t organically certified, but they work entirely organically except for mildew treatments. ‘This doesn’t mean that these people aren’t working well in their vines.’

It’s problematic if we equate organics with high quality, or if you are high quality you have to be organic. 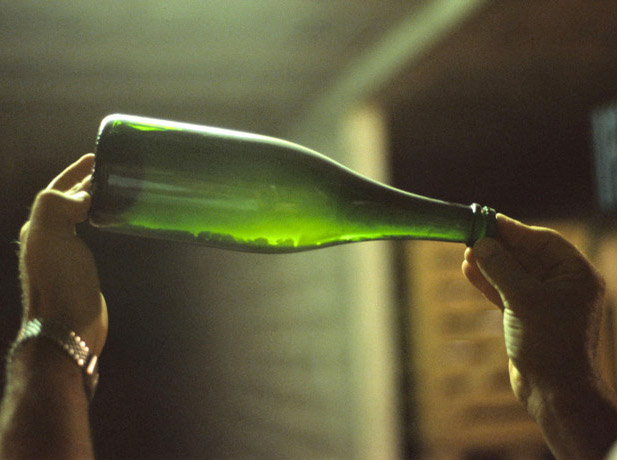 ‘This doesn’t mean the rest are doing bad viticulture,’ says Peter. It’s normal for organic farmers to have to spray 20-25 times a year. ‘Which is more sustainable – passing a tractor 25 times through the vine, or going through once or twice with systemics?’ Organics is quite limited in scope, and doesn’t take into account wider issues of carbon footprint.

The Champagne region has taken the widely adopted sustainable certification HVE and produced its own souped up version called VDC. 15% of producers are now certified with this which is really promising. ‘These incremental steps are important for the future of the region as a whole,’ says Peter. Agrochemical inputs have been reduced by 50% in recent decades, and the goal is for Champagne to have zero herbicides by 2025. The region is on track to make this happen.

Dosage is the single most misunderstood topic in Champagne,’ says Peter. ‘Even by winemakers.’ He says it is a big mistake to think of it as an additive, because then you try to eliminate it. ‘My wine is so good it doesn’t need dosage,’ is the idea that some winegrowers have. But dosage, says Peter, has a function that is very much like salt in food. We don’t add salt to make a dish salty – it has an ability to enhance and amplify the flavours that are there. Even the best produce can taste bland without it. He says that dosage does the same – there is no ideal level, because every wine is different. There are some Champagnes that don’t need sugar, but these are very rare.

It is true, though, that levels have been reducing over time. 25 years ago the average was 10-12 g/litre, now it’s 6-8 g/litre. Many say this is because of climate change, but this is not necessarily true. A great example is the 2003 vintage, which was the one with reduced yields because of frost and then a hot summer, resulting in concentrated, ripe wines. At the time people were saying this meant the wines needed less dosage. But Anselm Selosse said that they needed more dosage not less, and in time he turned out to be right. 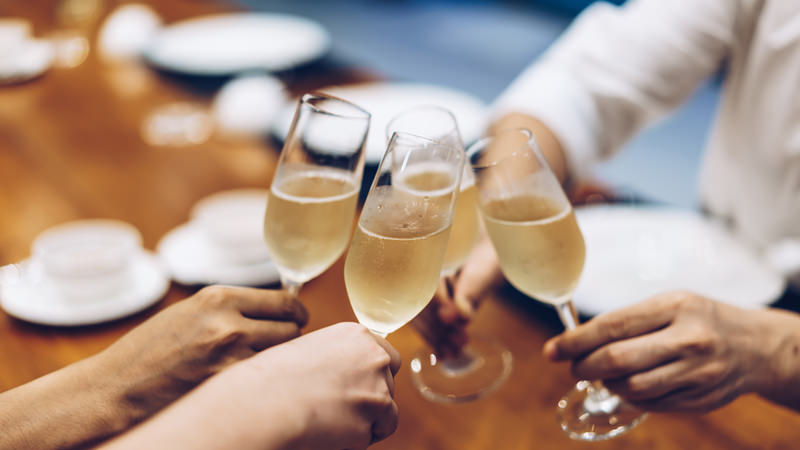 There’s also a misconception that a high dosage helps a Champagne age. Dosage can certainly help a wine to age, but it isn’t needed.

Peter concluded by saying that Champagne is a complicated wine and a region, but it’s well worth the effort required to understand it. ‘Champagne today is more diverse and higher in quality than it ever was before.’ This is good news for those of us who love drinking it.