How much information can you extract by just looking at the colour of a wine?

By Sylvia Wu
Color is the first hint about a wine, offering you some initial clues about the style, age and taste of the liquid in your glass. To properly observe wine color, you should ideally pour the wine into a clear glass in-front of a white background. Tilt the glass to examine the colour spectrum and its intensity.

However, wine colour can’t tell you everything, and it can sometimes give false impressions of how a wine will taste.

Some scientific research has also shown that color can influence taste, as Richard Hemming MW cited in a 2015 article on the subject in Decanter magazine.

So, what can we learn by analyzing wine color?

Wine color: Where it first comes from
In the first instance, it is the pigment in the grape skins that brings color to young wines. Color can then be extracted from the skins during the winemaking and fermentation process. Many white wines are made from ‘white’ grapes, which are green when picked. Skins are separated from the grape must before fermentation. Extended skin contact for white wine grapes is a key feature in the production of ‘orange wines’. Red wines are made from black grapes and the skins have been left in contact with the grape must during the fermentation process, to extract colour.

Some grape varieties naturally lend more colour than others, and this can help you spot them in a line-up.
A young wine made from thick-skinned Malbec or Syrah / Shiraz grapes will more commonly have a deep purple hue, while a thinner-skinned Pinot Noir wine will often take on a pale complexion. However, the growing climate and a winery’s decisions in the vineyard affect where a wine sits on the colour spectrum. Winemaking processes and storage conditions can also alter colour and its intensity. The amount of color extracted depends on the winery’s methods, such as the length of fermentation. Some producers prefer a cold soak maceration before fermentation, to encourage colour to seep from the skins without extracting lots of tannin.

It’s possible for black grapes to produce white wine, as long as the skins are separated from the juice quickly enough. A classic example would be the use of Pinot Noir in Champagne. In particular, Blanc de Noir Champagnes, made from 100% Pinot. There are several ways to make rosé wines. These include the saignée method, which essentially involves ‘bleeding’ off pink juice early in the red winemaking process, or leaving skins in contact with the juice for a certain amount of time before fermentation

Oxidation and aging
As white wines age they tend to gain colour, moving from lemon through to gold, amber and eventually brown. This is an oxidative process also known as ‘maderisation’; a term taken from the production of Madeira wines. Red wines tend to lose colour as they age and oxidise. They may begin with purple or ruby tones, move through to garnet and eventually take on a tawny-like appearance. Tawny Ports, which are usually made from red grapes, can appear to be golden brown in the glass after decades of ageing. 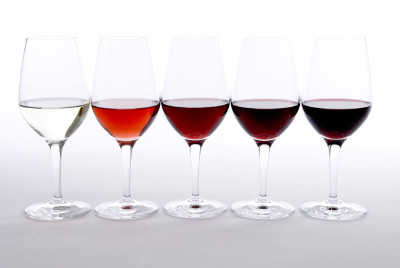 Does that mean we can tell how old a wine is by the color?
Color is certainly a useful hint, and it can give you an idea of a wine’s stage of development. But, the level and rate of oxidation is far from uniform; it can be affected by how wines are made, matured and stored. A wine may be kept in a reductive environment, such as stainless steel tanks, to retain freshness and primary fruit character, for instance. Wine fermented or stored in oak will be exposed to small amounts of oxygen. Smaller casks mean greater exposure. The chemical stability of a wine, such as acidity level, and the humidity and temperature levels during storage can also influence how fast a wine ages.

What does color tell us about flavor and sweetness?
It is a challenge to deduct the taste of a wine just by looking at the color. We tend to associate deeper colours in red wines with more concentrated flavors, higher tannins and alcohol. Yet many red wines can defy that assumption. Barbera from Piedmont, for instance, tends to give deep ruby colours, high acidity but low tannins. Some young Beaujolais wines made from the Gamay grape can appear quite dense and purple, despite being relatively light-bodied with low tannins. Other Beaujolais wines, particularly from certain ‘Cru’ areas, have a bigger structure.

Color may also give us false signals about the sweetness of a wine.
‘Halbtrocken’ German Rieslings and late-harvest Muscats can both appear to be clear and light in color, just like dry white wines, for instance. The same applies to ruby Ports, where a fresh and bright appearance may mask the wines’ sweetness and intensity. Many lusciously sweet wines, such as Sauternes and Tokaji Aszú, are golden or amber in colour. However, a wine with a deep golden, amber or honeyed appearance can still be dry.

Orange wines, a style gaining popularity in the last decade, are dry wines made from white grapes with prolonged maceration on the skin – essentially, they are made as if they were red wines. Contrary to a common assumption, the bright amber color of orange wines largely comes from the skin, not oxidation, although the winemaking process is often oxidative. While they can also be misleading, the varied, vivid colors dancing in your glass are also part of our fascination with wine. As Richard Hemming MW put it, ‘Colour is a vital part of not only the science and understanding of wine – but also of its enjoyment.’

Ready to explore all the colors of wine we have to offer?
Visit us at GoldenGateWineCellars.com!
As always, don’t hesitate to call us at 415-337-4083 or email frank@goldengatewinecellars.com for selection advice or assistance!