A book review of “Wine for Normal People”

Writing an introductory text on wine is no small feat. A book that takes someone from, “Sure, I like wine, top me off!” to “Lemme break down the Médoc for you.” is a journey spanning two pretty distant points from one another and is why so few people to take on this Herculean task. 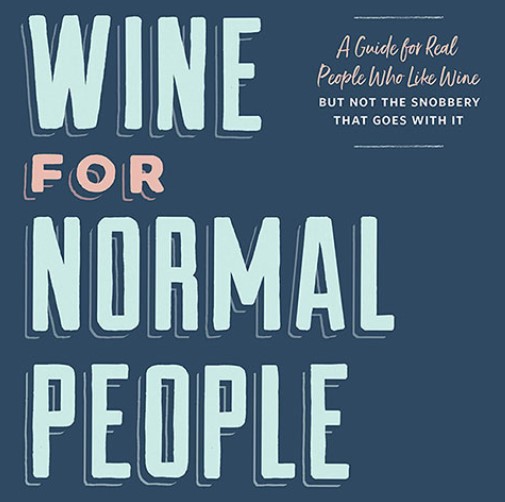 But I would say the hardest aspect in all of this is actually getting people to pick up and read such a book. I refer to my baseline in all such things, my mom. She was happy to churn through the pages of “Buddhism for Dummies” but when I suggested she look into “Wine for Dummies” to get a better handle on things, she passed on the opportunity.

People just want to drink wine and not think about it, which I really can’t blame them for. It seems to be the case that those who write a successful introductory wine text (whether that means financially, creating something of merit, or hopefully both) have established a following of people who enjoy their approach to taking on such an onerous, yet delicious topic as wine. History has shown that learning about wine proves to revolve more around a cult of personality than anything else whether that’s a classic example such as Jancis Robinson, newer media like Gary V, or then whatever “influencer” may be the flash in the pan at the moment.

And so we come to Elizabeth Schneider, who, along with her husband “MC Ice” have been doing the Wine for Normal People Podcast for exactly 10 years now although the accompanying blog started in 2009. That means Elizabeth has been doing a podcast loooong before all these others decided that people wanted to hear what they have to say in a rambling, unedited fashion due to confinement during the pandemic.

In having been such a stalwart, she’s amassed a loyal following. Why? If you listen to any of her podcasts, you can immediately see why as she talks about wine in a friendly, conversational manner that people can relate to. Sounds easy and there have been others who started off this way, but then fell head deep into the cesspool of wine twattery quite quickly. Elizabeth has not succumbed to this (probably as she finds release in her aptly-labeled “geek” podcasts) and, as often happens with such ventures she created a book, unsurprisingly titled, “Wine for Normal People” that was released in 2019.

Obviously shifting from the 45-50 minute podcast format that people can listen to in the background to a text wherein people have to actively read to gain information is a big shift up in terms of format. I have to tell you that I’ve read a lot of texts that purport to do what Elizabeth has taken on here and many of them fail. Elizabeth’s simply does not.

She’s managed to keep a conversational tone throughout the text, embodying her podcasts remarkably well. For example in a brief mention about biodynamic farming she says, “I know biodynamic farming sounds kind of out there.” to show she knows what people are thinking when they hear about burying cow horns packed with manure in the field.

She also has great little pullout quotes and sidebars to keep people interested. For example she says that in general, the lighter the color of wines in both red and white, the lighter in alcohol they’ll be. To be honest, I’d never really thought about this, but she’s very much right and it’s one of these great nuggets that gives people something to grab on to whilst traversing the vast chasm of wine knowledge intake.

But I think more than anything else, it’s the fact that the book looks sharp. It’s well designed to be clean without being cutesy. It rivals another text that intends to simplify wine learning and which people always applaud for the design. In the case of Wine for Normal People, it not only looks good but actually has accurate information which is something that the other text is vastly deficient in.

Is it a quick read? No, because it can’t be. But it does overall excel in brevity as much as possible and I like the fact that in the Germany section Elizabeth flat-out says that German wines are difficult. She tries to cover it in as much detail as makes sense just so that people are aware of them and have some text as reference, but by acknowledging they’re not easy has probably helped many readers to breathe easier.

I’d say that if Elizabeth were to publish a newer edition at some point, she could perhaps work to slow down how fast the knowledge ramps up. This is difficult as it is too slow and people get bored but too fast and people get overwhelmed. As it sits, it flirts with being a bit much on the latter but just a little and I say this with full admonition this is an extremely hard thing to pull off. About the only text I’ve ever seen do this perfectly was “The 24-hour Wine Expert” by Jancis Robinson and that’s only due to massive amounts of information being left out in order to give a very slim, quick overview of things.

The only final item I would put up for critique are the pronunciations. Being American myself, I know that we have a massive phobia of saying words incorrectly. But the word pronunciations used in the book aren’t based upon the International Phonetic Alphabet (which is what Wikipedia uses, for instance), and a number of them are actually approximations and thus in strict terms incorrect such as sommelier which has been written as “sum-uhl-yay” after dismissing the actual French pronunciation which is one of my pet peeves – it drives me as crazy much like when Spaniards call Facebook, “Fah-the-book”.

Of course, you can just skip these bits and in fact, this is designed to be a reference book so you can easily take away from it whatever parts you want, whenever you want and for that, it’s easily one of the best introductory wine texts available today.