Battling the Shame of the Rosé

Are rosé wines inherently inferior, or is it a case of outright discrimination?

If there is one category in the world of wine in which, to be honest, no-one really takes all that seriously, it’s rosé. A lot of wine people will say they like rosé, but that it has to be a serious rosé, a “proper” rosé (of the south of France, basically), with the colour of a partridge’s eye, and a bit of structure, and it has to be dry, and it has to have good acidity, and good length.It’s the kind of wine that exists in their head, but not in real life. Because there is no such thing as great rosé – not to an expert, anyway.

When was the last time you heard of a 100-point rosé? Never. How many big-hitters in the wine world regularly rave about the cheeky blush Zinfandel they enjoyed with tacos the other night? They’d be turned on like a clown in a gorilla enclosure. If you really want a gauge on how unpopular rosé is among the cognoscenti, I’ve never seen Jamie Goode in a rosé T-shirt. The UK critic and writer owns a T-shirt collection so vast I can’t be 100 percent sure he doesn’t own one, but I’m close to certain he doesn’t have a branded Domaines Ott or a “brosé” tee lurking in his vast collection (which, in our housebound age, is currently getting a regular airing on Instagram TV).

No, we don’t “do” rosé. I suspect it’s because we still see it as the halfway house wine: don’t feel like a red; don’t feel like a white; well… And this is why, I think, so many celebrities and Millenials are running with rosé. It’s one of – if not the – largest growing wine category in the US, and I suspect that is purely because wine lovers have not taken any notice of it. There are rare exceptions – Elizabeth Gabay MW has published a book on rosé, I’m told – but it’s a drink one doesn’t need to “get” wine in order to enjoy. No-one is going to sneer at you – much less revere you – for drinking rosé at a party. No-one who knows wine, or even knows a little bit about wine, is going to give you grief.

And the same is true of celebrities. Everyone – figuratively everyone – is jumping on the rosé bandwagon. And it’s because they are safe from a horde of critics asking how much new oak they use, wondering what the viticulture regime is like, asking about post-ferment maceration times and premature oxidation. It’s safe.

Furthermore, there is definitely  a level of cynicism in rosé production globally. To ignore that would be unfair. Syrah not going to get ripe this year? Turn it into rosé. Merlot starting to show the effects of a damp season? Rosé. Change in sales forecast for Cabernet Sauvignon? Rosé. Pinot Noir cropped too high? Rosé. There are any number rescues for red grapes and they generally involve making a pink wine. But remember: there’s no lack of commercial cynicism in standard red and white wine production either. There are any number of techniques with which winemakers can polish a turd – that’s part of the reason we get the natural wine movement. So why are we so hard on rosé?

Because we’re basically snobs, and rosé exposes wine people to that inevitable conclusion. Just look at the regulations for making rosé in France: you can’t blend white and red wine to make it. Oh, except in Champagne, though. There you can because… well, just because…

In fact, rosé Champagne ratings give lie to the claim that rosé cannot be a serious wine. There are very very few still rosés at The Wine Advocate to get between 95 and 100 points. I counted four – yes, four. The other 50 were all Champagne or sparkling. The only wine therein to get 100 points was the 2008 Louis Roederer Cristal Rosé. Which, while that remains remarkably instructive by itself, at the very least shows that one can produce a 100-point rosé.

Even if you bring in the 94-pointers, just under 6 percent are still wines, the rest fizz. In fact, if you look at all wines scoring between 94 and 100 points on the Robert Parker site, you get 37,000 wines. Of which there are six still rosés. Six. That’s not evaluation, that’s discrimination. The 2019 Decanter World Wine Awards is perhaps a little less shocking but still at the same level: the top rosé got Best in Show with a 97/100 score. It was accompanied, in the top tier, by five other still rosés. Out of 818 other rosés and a total of around 13,000 wines. Even rigged elections don’t have those ratios. And I’m sure most other wine sites are the same. In fact, with numbers like that, I’d go as far to suggest that wine critics are incapable of “getting” rosé.

You could, of course, make the argument that this entire category will never make great wines – but that poses a problem for the likes of Cristal, or any other top-scoring rosé. Should they hand back their laurels? Furthermore, the fact that rosé Champagne regularly scores well blows the notion that blending red and white wines is not a valid winemaking method out of the water. The least acceptable technique produces the best wines of the category? Strange.

Oh, but bubbles, you say? Well, at what point do we stop shifting the goalposts? After all, let’s be honest: the process for making rosé is no different to that of making white wine. And yet it is never – never – as good as white wine? Please.

And unless you refute a superstitious belief that, for some reason, wines must respect the color of their grape or they are automatically 93 points or less, or that the global winemaking talent we have is incapable of making a great pink wine, then you’ll get what we have now. Which is, I believe, fully fledged and deeply ingrained discrimination. And that’s kind of ridiculous.

What I actually think happens is that there is an automatic glass ceiling placed on the score of a rosé the moment a critic sees its colour. It’s 97 or 96 max – “grand max” if we’re adopting the French-isms wine writers love these days. 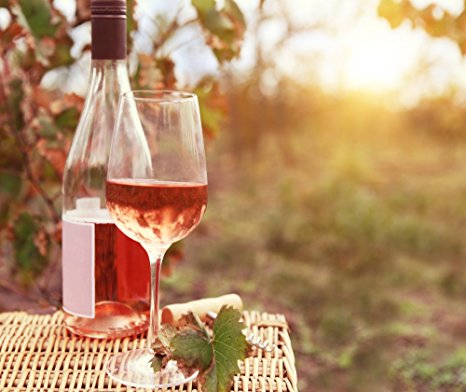 So the writers and critics now have to do one of two things: either admit they are snobs and attempt to make the claim that rosé can never make good wine; or acknowledge that there may be the semblance of discrimination against rosé that is, at the very least, unjustified, and move to judge rosé with less preconceptions. Maybe – and this might be much more useful than we suspect on face value – we might do well to define what great rosé is before we start scoring it. And don’t give me that nonsense about a capacity to age. If we could judge wines on their capacity to age, people would be able to judge Bordeaux wines blind (which they can’t, apparently), and after all, being able to age isn’t an automatic five-point bonus. I can age a can of Sprite.

So if wine lovers bemoan the fact that the likes of Post Malone, Brad Pitt, Angelina Jolie, Cameron Diaz, and the like are getting into rosé; if we decry the dubious marketing strategies that surround the category; if we feel that we can’t tap into the rosé boom with Millenials; if we get grumpy about “brosé” (I still do, to honest, and I don’t know why); then we only have ourselves to blame.

Sure, there’s a cynicism behind rosé production but that’s not unique to rosé. I truly think we’ve been horrifically unfair to an entire category that is only just getting the recognition it deserves. And it’s not getting it from the tastemakers, from the critics, from the people who supposedly know better – it’s getting it from the masses.

That doesn’t mean the masses are right; it just means the rest of us might have got it wrong.