Firebelles and research vineyards:
125 years of history at Larkmead Vineyards

By Jess Lander
In NapaWineTaste.com
For a Napa Valley winery, making it to 125 years is no small feat. And yet, despite predating many of the region’s most iconic estates, Larkmead Vineyards in Calistoga has managed to fly somewhat under-the-radar for over a century. 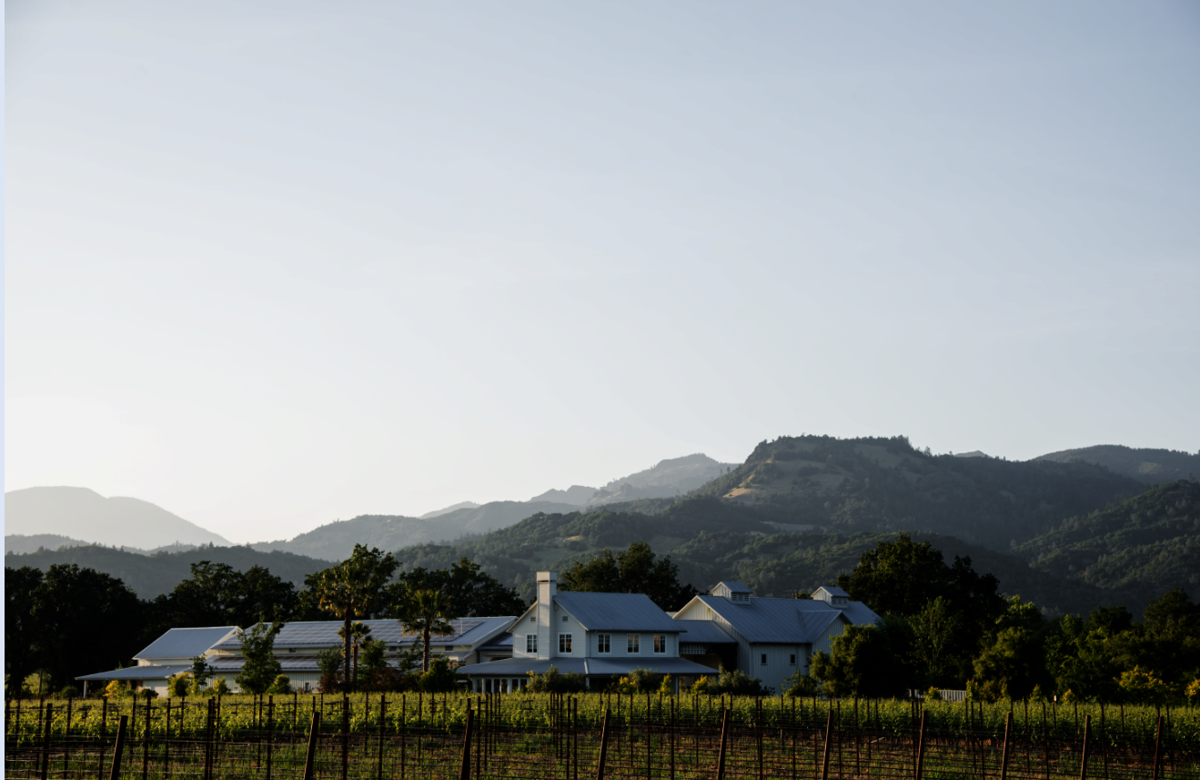 In anticipation of this momentous milestone, proprietors Kate Solari Baker and Cam Baker, working alongside winemaker-turned-historian Dan Petroski, have spent the past few years digging deep into their past.

What they discovered was a colorful cast of characters that each had a significant influence not only on Larkmead but also on the evolution of Napa Valley and the wine industry that we know today. Inspired by the marks that each person left, Larkmead has woven their spirits into the winery’s present and future.

Firebelle Lil’
One of the most fascinating players in Larkmead’s history was a firecracker named Lillie Hitchcock-Coit (San Francisco’s Coit tower was named in her honor, but that’s another story). She was only around Larkmead for 20 years in the late 1800s but made a lasting impression. “She packed a gun, she rode a horse, and apparently took herself to the Bohemian Grove dressed as a man and got in. In those days, she was out there big time,” said Solari Baker.

Her family owned 1,000 acres that stretched from the Mayacamas Mountains to the Silverado Trail and from Sterling Vineyards to Larkmead Lane. Sent to Napa Valley to quiet down from her oft-controversial, free-spirited ways, Hitchcock-Coit lived in a house set on what’s famously known today as Duckhorn’s Three Palms Vineyard. She was the one who planted that famous trio of palm trees and she also had a train stop built on Larkmead Lane (which she named after the local meadowlarks), enabling her artist and intellectual friends to come in from the city for lively salons that she would host. 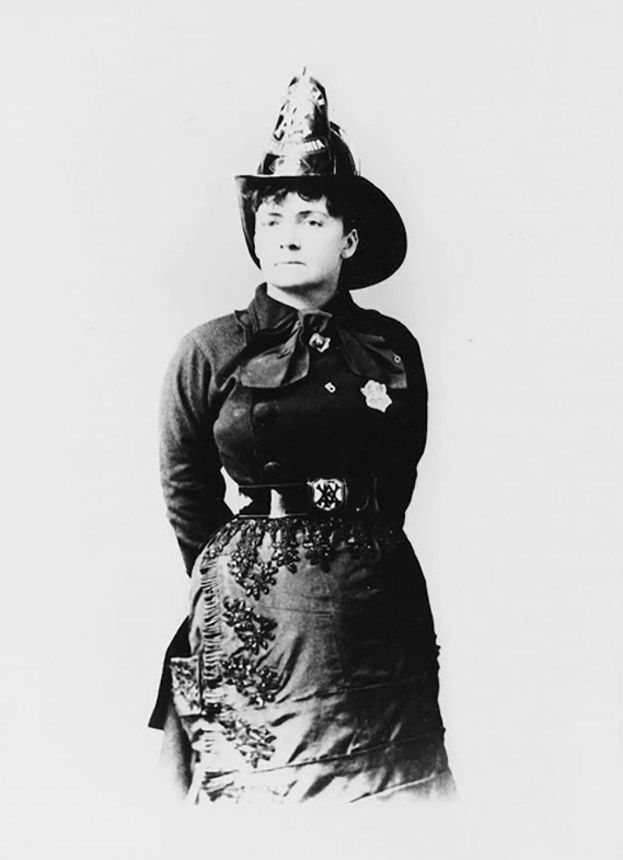 “Early on, [her story] was very important to our identity,” said Solari-Baker. “She named Larkmead Larkmead and I think we are very fortunate to have that name. I think it’s very special and it just sings to people. Calling it the Baker Winery just doesn’t have the same thing going that Larkmead does and it has all this history.”

Larkmead has named three of their wines after her and they’ve recently started hosting salons again. There have been book events, art exhibits—often featuring Solari Baker’s own creations—and open conversations about the future of Cabernet Sauvignon in the face of climate change, hosted by Petroski.

“When I started here in 2006, Napa Valley was a world-class wine region, but it was still a very rural town. During that period of 2006 and moving into the ‘10s, it was more of just getting together with people and talking about a lot of what was going on and why it was happening and exchanging ideas,” said Petroski. “We wanted to kick off with some kind of communal event that felt like we would exchange ideas and talk about the future or the current. We played off the term The Salon at Larkmead because that’s what was happening in France, the salon-style lifestyle, and it had a reference to Lily and our history, so it was really nice to tie it back.”

The Salminas and Dr. Olmo
Hitchcock-Coit fled to France at the turn of the century, and Larkmead’s wine-making history truly began when the Salmina family, who had arrived from Switzerland and had been making wine at Conn Creek, settled at Larkmead in 1895. By 1915, their wine won gold at the Panama–Pacific International Exposition, a world’s fair held in San Francisco.

The Salminas struggled through Prohibition (and the Great Depression) but managed to stay afloat by selling fruit and making sacramental wine. When Prohibition was lifted, they got right back to making wine, and today at Larkmead, visitors will see a frame showcasing more than 50 faded ribbons from the California State Fair, awarded between 1936 and 1941.

A 1943 article in the St. Helena Star read, “The story of Larkmead follows closely the development of the great dry wine industry here, in which Larkmead products played their prominent part in bringing to this district a fame not surpassed by French wines in their heyday.”

But perhaps the most significant figure at Larkmead during this era wasn’t part of the Salmina family. It was Dr. Harold Olmo, one of the most distinguished viticulturalists in history who developed the Oakville clones that helped put Napa Valley on the map.

In 1939, the Salminas invited Dr. Olmo to plant a research vineyard at Larkmead. He planted Cabernet grape varieties — decades before Cabernet became king in Napa — and also several Italian varieties for the Salminas. One of these was Sangiovese, which wasn’t commercially-planted in Napa Valley until 1982. From this vineyard, he selected the Cabernet clones he eventually brought to the Oakville Station.

In honor of their 125th anniversary, the Bakers gave $200,000 to the UC Davis Research Library to help digitize and preserve Olmo’s work. They have about 80 boxes of files to sift through and Olmo certainly didn’t make it easy for them.

“Olmo was a very private man in his research, so he did a lot of weird coding,” said Petroski. “When you look at some of his documents, the way he wrote his notes on Larkmead, there’s like four numbers. There are no clones with four numbers in Cabernet, so it’s pretty mysterious. We have to crack the code.”

Olmo’s work at Larkmead has come full circle with Petroski’s planting of a new research vineyard — coincidentally, exactly 80 years later — this one to test different grape varieties that may be able to withstand climate change.

“It’s been quite shocking and fascinating how the tide has turned, to see how things have been moving and starting to question why Cabernet acts and reacts the way it does on our property,” he said. “If it continues to get warmer, and we are in a very warm, stressful site, will Cabernet continue to play an important role in our property?”

The Solaris
A few years after World War II ended, Solari Baker’s parents, Larry and Polly Solari purchased Larkmead in 1948. It’s been in the family ever since. An Italian immigrant, Larry Solari was a lesser-known pioneer of California’s wine industry. He leased and then bought the property through the Italian Swiss Colony, where he was working as a sales manager. His job: convince Americans to drink wine with dinner.

Later, he became the president and CEO of United Vintners. “He was kind of a big deal in the wine industry during those days, but the wine industry wasn’t anything like what it is today,” said Solari-Baker, reminiscing about her father and a time when vermouth was what everyone was drinking. “People didn’t drink wine. They saved it for when the boss came to dinner and that was about it. It was a whole different scene.”

In the early years, Solari Baker said her parents opened up their old and “decrepit” facility to several wineries to crush their grapes because many others had shuttered during the war. But a couple of years after acquiring the property, Larry Solari, just shy of 40 years of age, was given devastating news: he had cancer and it was terminal. The Solaris decided to sell the winery building, which was located across the road where Frank Family Vineyards is now and keep the land. In 1960, they entered a 20-year exclusive contract with Inglenook for their fruit. 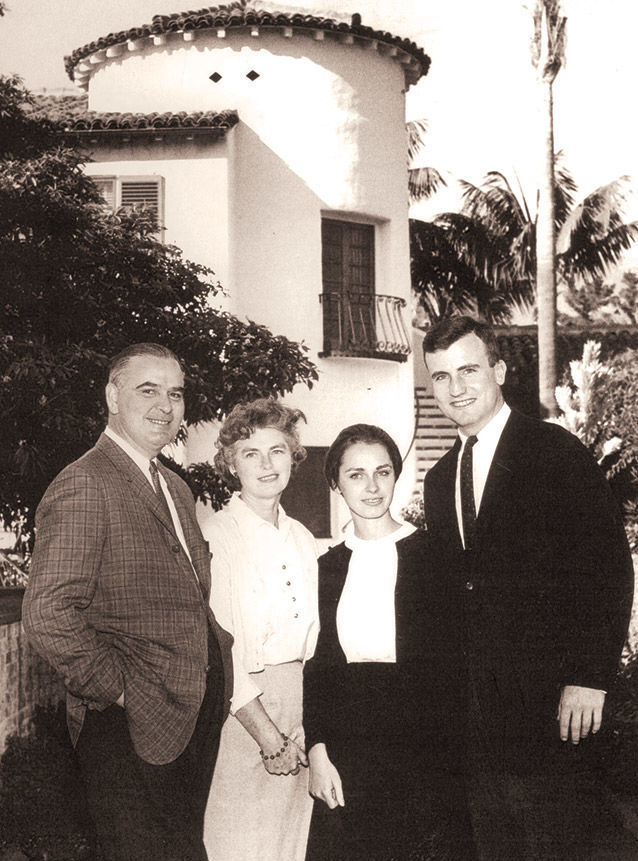 Larry Solari commuted to the city every day, which left Solari Baker’s mother running most of the day-to-day business operations, a rarity for women back then. “She tried to join the Vintners and they said no. Men only. But she pretty much held the fort,” said Solari Baker, who has since repurposed her mother’s handwritten ledger papers into a series of artistic Napa Valley maps titled “Keeping Accounts.”

Her father eventually got a second opinion and learned he didn’t have cancer after all. He went on to live more than three decades past that initial diagnosis, but his dream of running a winery was never realized, at least not during his lifetime.

“I think he sort of lost heart after he sold the winery. When he retired in the ‘70s, it was his plan to actually build a winery, but then he really did get cancer,” said Kate Solari-Baker. “I think he just lost his mojo to keep going.”

The present … and future
When her mother passed away in 1992, the family’s assets were divided up between the three children. “We ended up with Larkmead, my brother ended up with Bennett Lane and my sister ended up with money,” said Solari Baker. She and her husband Cam dove right into the vineyard in 1993, but it wasn’t exactly an immediate success.

“We had a pretty steep learning curve. We had a couple of people advise us who weren’t terribly knowledgeable, or maybe they didn’t really understand this property as opposed to other properties in the valley,” she said. “So we did some planting and we got something called Black Goo that infected a lot of the vines. We had a pretty rocky start. We had to replant a couple of times and it was very expensive.”

Over time, they pulled out several white varieties, including Chenin Blanc, Chardonnay, and Sauvignon Vert, replacing them with red grape varieties. They even began to make a small amount of their own wine, which they custom crushed, and hired their first winemaking consultant, Paul Hobbs, in 1997.

Andy Smith, Hobbs’ former assistant, took over Larkmead winemaking in 2000. “That’s when things really started to turn around,” said Solari Baker, insisting that they had planned to keep things low key. “We were living in Marin, my husband was a practicing attorney, I had three little kids and was starting my art career. We had our hands full.”

But as they reinforced their commitment to the wine quality, they realized the next logical step was to produce it in-house. And so began the process of honoring her father’s lifetime dream of building a winery. The first phase was finished in 2005, just in time for harvest, and in 2006, they completed their hospitality center and tasting room. Both were later expanded and renovated, finishing in 2013 and 2014 respectively.

Naturally, this commitment to excellence extended to the vineyard, too. “It wasn’t really until the mid-2000s that we started to look at the vineyard from the ground up. Once we did that, it really opened their eyes to the greatness of the site,” said Petroski, adding they’ve since divided their 110 planted acres into 56 distinct parcels. Come harvest, each is usually combed through several times. “We can continue to dig deeper and I think that is our goal. There comes a point where it’s a little too much, but I personally haven’t reached that tipping point and I’m super excited every time harvest comes around.”

The Solari Bakers have spent the last two decades growing, improving, and evolving Larkmead, and now, it’s time to take a moment to reflect and celebrate. Initially scheduled for April, their 125th anniversary party had to be postponed. But when the winery is able to reopen, they’ll have a new, by-appointment gallery set up, displaying roughly 50 photographs, letters, ribbons, news articles, and other relics of the past that have been collected over the years. They will also host a special 125th-anniversary virtual tasting for wine club members in May.

In the meantime, Larkmead is already looking ahead. Just shy of Solari Baker’s 80th birthday in March, the family sat down with the third and fourth generations to talk about a succession plan. “That’s the thing that’s really hard in family wineries is to keep it in the family,” she said. “But it’s our goal and we’re working very hard to do that.”