Out of grapes?
Use Potatoes to make wine instead…

There are high altitude vineyards, and then there are the fields on Manuel Choqque’s farm.

Twelve thousand feet above sea level in Peru’s Sacred Valley, Choqque grows a dozen or so varieties of oca, an heirloom potato that thrives in the low-nutrient soils and harsh climate high up in the Andes. Choqque, the so-called “potato whisperer,” is the country’s most renowned farmer of these beloved native crops, which are called “uqa” in the indigenous Quechua language.

Varying in size, shape, and color from bright yellow to deep purple, oca can be sliced and fried into addictive potato chips, simmered in stews, and slow-cooked with corn to make a sweet and creamy dessert custard. But beyond their expected culinary applications, oca are now finding their way into the glass, as enterprising farmers like Choqque use their crop to create wine-esque beverages called vino de oca.

As with grapes in many wine-growing regions worldwide, there is one oca harvest per year. Choqque’s team plants 10 hectares of seeds in November and harvests the tubers in May or June, depending on the weather.

“For that reason we produce alcoholic beverages based on oca once a year,” he says. “It is a process very similar to that of grapes — fermentation, clarification, aging, and finally bottling.”

Packed into 200-milliliter bottles, Choqque’s four types of organic vino de oca are labeled Miskioca. “Miski” is the Quechuan word for “sweet,” but the name is a bit of a misnomer, as not all tout a high amount of residual sugar.

Miskioca’s juicy rosé is made from Black Oca, a long, slender variety that releases a red fruity sweetness reminiscent of strawberry, cherry, or raspberry. Another Miskioca variety is a red wine that features Mashua Negra, a black-skinned oca whose ends resemble the tightly wrapped petals of a flower; fermenting them results in an off-dry wine that’s almost a dead ringer for Malbec. (Choqque says that sommeliers in blind tastings have actually mistaken it for a fruity, red-grape-based wine.)

Yellow oca, whose flesh looks similar to Yukon Gold potatoes, goes into both a sweet and a dry white liqueur with notes of apples, peaches, and white fruits. The former three undergo an eight-month fermentation process while the dry style takes four months. 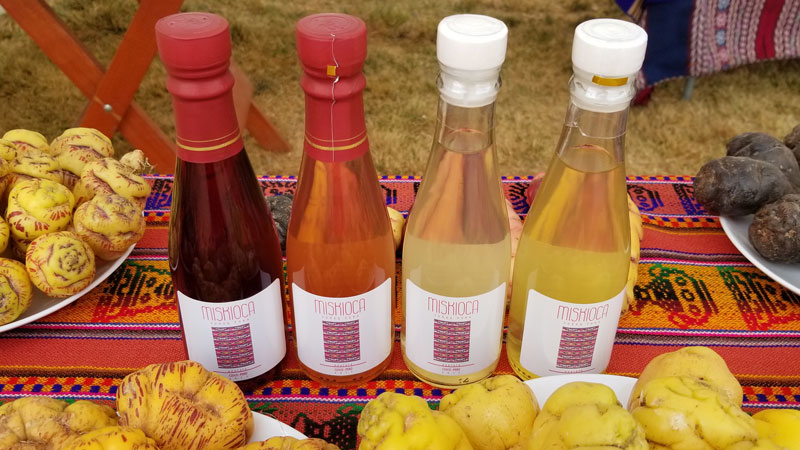 This year Choqque produced around 1,500 bottles of Miskioca; next year, he hopes to ramp up toward 10,000. Right now he partners with Central Restaurant in Lima’s Barranco District as well as Mil Centro in Moray-Maras, Cusco. Both list vino de oca on their menus and recommend it with their acclaimed Peruvian fare.

Choqque also has his own pairing suggestions. “I usually combine cocoa-based desserts with rosé or white liquor, [and] eat white meat such as fish, chicken, or seafood with the liquor produced with white oca,” he says. “And grilled or roasted red meat is delicious to combine with the semi-dry liquor made with Black Mashua.”

Guests who visit Choqque’s farm via a new excursion available through Sumaq Machu Picchu Hotel can tour the fields and then sample the wines over a three-course lunch comprised of oca dishes, and they also make their way into dishes at the hotel’s restaurant, Qunuq, for special menus like Munayki, a romantic dinner for two, and Apucc Mikhuna, Flavors of the Andes.

“They are [good] pairings for desserts or light appetizers, [like] salads with sweet flavors — or as the appetizer itself,” says Carlos Pardo Figueroa, executive chef at the Sumaq Machu Picchu Hotel, which offers excursions to tour Choqque’s fields and three-course meals comprised of oca dishes.

As for whether they are a niche offering or a growing category, Figueroa believes the answer is neither. “They are completely new on the market, so they are still adapting,” he says.