Five Ways Not to be a Wine Wanker

It has been a derogatory term bandied about for some time now. I am referring, of course, to “wine wanker”, two words referring to the type of person inhabiting the wine world who has a penchant for being snobbish, opinionated, sensitive, obsessive, manic and hysterical, as well as general holding a higher-than-thou’ attitude on the subject of wine.  Although many may be quite happy to fall in this category and proudly claim to belong to the tribe of unashamed wine wankers, some of us might prefer to be left out of this classification. Despite being partial to and fond of the greatest fermented fruit juice in the world.

So, here are five ways to avoid being labelled a wine wanker: 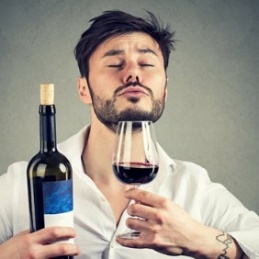 1. Admit to actually approving of wines made from Merlot and Sauvignon Blanc grapes. These are two varieties from which the most popular and best-loved wines in the world are produced. From USA to Britain, Russia to Germany, Japan to Argentina, everyone loves Merlot and Sauvignon Blanc. Except if you are a wine wanker. A wine wanker is not allowed to like any wine variety that is not only consumed in vast quantities by many people from all countries, but is actually enjoyed by masses of folk, too. By stating that you not only gain pleasure from drinking Sauvignon Blanc and Merlot but that you actually think they make good wines, you will be looked upon with sniggers of non-accepting approval from the wine wankers and forever be disallowed entrance into their midst. Even when you switch to amphora-aged Assyrtiko and biodynamic Alicante Bouchet.

2. Refuse to give a wine a score. This is a dead cert. Anyone unable to attach a score out of 20pts or 100pts to a wine will never receive wine wanker accreditation. For this accreditation, you are obliged to offer an opinion about every wine you drink in point form, as this is the one language of the wine wanker. Being unable to hold an impassioned argument as to why your 92pts is more valid than another person’s 89pts makes one immediately irrelevant as a wine commentator. Interesting is that when wine wankers are done debating the scores accorded a certain wine, they turn to debating the merits of the various point-systems themselves as well as arguing about whose 90pts is more relevant than the others. It’s weird, I know, but not impossible to escape.

3. The other language of the wine wanker is the vocabulary. Although varied and used by commentators of all ilk, the narrative of wine allows one to distinguish between a normal wine drinker and a wine wanker with discernible ease. Descriptors such as “floral”, “berry” and “citrus” can only be used by average, everyday wine people. To be referred to as a wine wanker the more prosaic and intangible terms such as “energy” and “tension” must be cut loose, with the odd “engaging” and “intelligent” thrown in. Once this cerebral attachment between the wine and its drinker has been established to the extent where the imbiber actually admits to this in writing or talking, your wine wanker badge is being prepared for mailing, and there is no turning back. Avoiding these will spare you the pain and the tension. Save your energy. 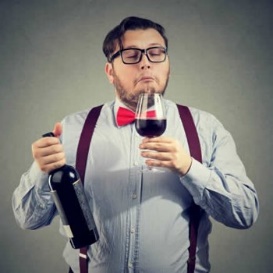 4. Smile when tasting. There they are, the wine wankers assessing the glass before them. But why do they do so with the sour, frowned and suspicious expressions of a proctologist who has just encountered a mysterious-looking anal wart? Because wine wankers are not allowed to appear as though they are having a good time when tasting wine. Each wine must be scrutinised and interrogated for a possible fault, a de-linear composition or an off-putting edge. No time for doing what wine was created for, namely distracted, unperturbed drinking between bouts of relaxed conversation and the odd touting around of humour and bonhomie. If you thus chug back a glass of Chardonnay with a smile on your face, a sigh of contentment and a show of joy, wine wanker status will avoid you like a steely Riesling rejects malolactic fermentation.

5. Speak Afrikaans. English is God’s language when it comes to wine, especially in South Africa. Opinions on wine, whether in writing or communicated orally, are only relevant when done so with a hot-potato arch of the vowels or adoring alliterative bouts of noun-fuelled opining. Afrikaans is deemed the talk of the plebeian, a linguistic affront to the culture of wine which is made to be talked about with the same kind of haughty righteousness deployed to address a Corgi who has just done runny crap on the Royal rug. By entering a vinous environment and daring to engage in the staccato, guttural notes of Afrikaans, no wine wanker shall allow you into his or her midst without committing hara-kiri with a shard of freshly smashed Riedel.

Well, even if you can’t speak Afrikaans (I sure can’t), you can probably speak wine! Come join me every Saturday in our in-store tasting room and let’s speak wine while we sample some of the world’s best wines. See the full tasting calendar below or at GoldenGateWineCellars.com!