Chardonnay was clearly the American wine sweepstakes winner in the 30 years following its ascendancy about 1975. Cabernet had a slightly longer run, roughly 40 years in the driver’s seat after it arrived about 1976.

For reasons too numerous to delineate here, both grapes had their days in the sun truncated recently by an obstreperous, truculent, and irritating upstart that has created no end of headaches for the wine industry, and which continues to search for its rightful home base among the wine-buying elites.

Of all the grape varieties that claim preeminence in this world, disheveled, tattooed, unshaven, sandal-wearing Pinot Noir seems to be the least likely candidate for stardom. Only statuesque Riesling ever gets this sort of praise. 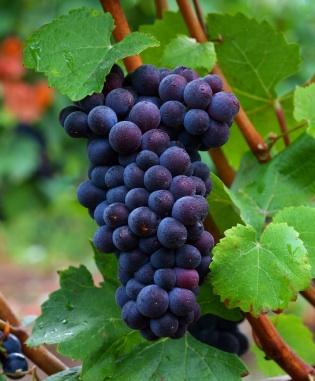 Pinot Noir is fractious — difficult to grow, doing best in harsh, colder climates that threaten to produce nothing drinkable in times of stress. It’s susceptible to vineyard maladies, has a propensity for turning evil once at the winery, and even if the fermentation goes perfectly, occasionally becomes brutally argumentative. And no one has developed a Zoloft for it.

Yet those who pay ungodly sums to acquire the very best (which by acclaim are French Burgundies) swear there is nothing quite like this in the entire world of wine.

Bordeaux lovers speak of the greatness of the best wines of the great houses in great vintages — and the exhilaration they experience after a single sip. In some ways, such comments are about the speakers, not about the wines.

Burgundy lovers most often focus not on themselves, but on the wines and their astounding complexities, both in new releases and very, very old samples.

Robert Mondavi and I and several others shared about an ounce each of an 1865 Beaune in the 1980s. One initial sniff and one tiny sip was all I ever needed to see what the Burgundy-ites were cooing about. Mondavi and I were awed.

For me, one glass of a great Bordeaux shows richness, depth, and broad flavor development that’s all about abundance. But a great Burgundy is all about nuance, the multitudes of elements, some based on fruit, some on soil or minerals, some on herbs, tea, sea spray, dried leaves, tobacco, tree bark after a rain.

Poets come to mind.  Bordeaux is about power and intensity. Burgundy is about grace and distinctiveness.

Pinot has lately taken on such mythic proportions because finding a truly great one is difficult and can be pricey. Not only is so little great stuff made, but the best Burgundies are often sold to wealthy insiders long before a bottle ever gets out of the producer’s cellar.

(So much for that score of 99 points for a great red Burgundy. The words used to describe it define extravagance until you look at the last word in the review: “Unavailable.”)

Indeed, the fact that California and Oregon Pinots are in vogue today is testament not to its complexity in old age as much as what it brings to the dinner table as a youngster, and how it has effectively poisoned the wine market for just about any red wine that doesn’t offer what it does.

And that is to provide a tasty, lighter-weight red wine experience without any of the nasty, astringent tannins that have caused so many red wine lovers to abandon Cabernet and seek alternatives.

It is that one key factor – astringency – that has divided Pinot Noir lovers from Cabernet lovers. The latter seem not to fret over tannin “bitterness” (they almost never refer to tannins as being bitter).

Cab lovers speak in terms of power and intensity. They seek scores above 95 points. And they will pay almost anything to get what someone else says is the best. Hundreds of dollars a bottle? No problem. For them, Bordeaux is an option, as are California Cabs.

Pinot people seem less awed by points, but react quickly when the highest-image Pinot Noirs are available. This may well be because high-end Burgundy is simply not available, so the next best thing is from California or perhaps New Zealand.

Another thing that separates Pinot Noir from Cabernet is how both should be treated. Years ago, to drink the latter wine when it was young was considered unthinkable. The tannins were so harsh it was hard to justify subjecting one’s palate to that treatment.

So we aged our Cabernets for 20 years or more, until the late 1990s, when winemakers changed the style of wine to one with much higher alcohol, and softened the acidities so the wines could be accessed much more quickly.

However, without the proper structure to age, Cabs rarely took on the complexity and depth that the earlier vintages provided.

Pinot, on the other hand, didn’t require aging, so it could be consumed more quickly. The best could easily go a decade, perhaps two, in the bottle, but aging was optional. And in today’s less patient society, it was the wine we adored as an adolescent.

One more thing made the wines so different from one another. Both Pinot Noir and Cabernet Sauvignon should be served at cellar temperature (60 degrees to 65 degrees). But if a young Pinot is served a bit cooler (say 55°), no harm, no foul.

Does Pinot have a long run ahead of it? Yes, but only if the Pinot Noir sophisticates begin to appreciate and support the great diversity in regional styles.

One thing is certain: Pinot Noir is here to stay. And along the way, red wines that emulate Pinot Noir, such as cold-climate reds from other grapes, are developing a following as well.