WHAT EXACTLY IS MINERALITY?

The notion of minerality has become a valuable aspect of the rubric of wine tasting for some professionals. To understand this multidisciplinary and multimodal phenomenon, we need to turn to geology, botany, chemistry, oenology and sensory science. Minerality has been met with skepticism by scientists who point out that, whatever tasters mean by this term, it cannot be the actual taste of stones and fossils in soil. When a winemaker or critic says that a wine possesses the flavor of minerals, it is not only meant as a compliment but may also serve to identify a specific vineyard origin. Put another way, minerality has become a surrogate for terroir. That, unfortunately, does not make it easier to define objectively.

Where did the word come from? Surprisingly, it is difficult to say for certain. Even now, minerality is absent from most English dictionaries from Mirriam-Webster to the Encyclopedia Britannica – and, for that matter, Microsoft Word. On the other hand, mineralogy, the study of minerals, does have ancient origins. One of the early examinations of mineral substances was undertaken by Theophrastus, a disciple of Aristotle, in the 4 th century BCE. His tome, De Mineralibus or “On Stones,” gives physical descriptions of onyx, amber and quartz together with precious stones such as emerald, sapphire, diamond and ruby (Theophrastus, 1498). Pliny the Elder built on his work in Naturalis Historia of 77 CE. In the 16 th century, Georgius Agricola went further. In De Natura Fossilium (Agricola, 1546) – which has been called a foundational textbook of mineralogy – he wrote that “some minerals have a sweet taste,” halite (sodium) is salty, and copper is “very bitter and unpleasant.” He also observed that “certain minerals have an odor when struck with an iron or stone.” This has unexpected relevance to the discussion of minerality in wine. It was not until much later that certain key minerals were discovered in a chemical sense by Sir Humphry Davy (Davy, Encyclopedia Britannica). He is credited with isolating sodium and potassium (1807) along with calcium and magnesium (1808).
Oxford Dictionaries claim minerality has late 19 th century origins, but on investigation it appears this early usage related to mineral water, not wine. Oxford’s terse definition is simply: “a mineral quality.” For elaboration, we must turn to sources within the wine community. Wine Spectator offers the following: “Minerality is a tricky one to explain, but it refers to a group of non-fruit, non-herb, non-spice notes…Think of the taste of the sea that you get from crunchy sea salt or oysters. The smell of a sidewalk after it rains” (Dr. Vinny’s Archive, www.winespecator.com). We may suspect that minerality must be the phonetic equivalent of the French “la minéralité” but this leads us on a wild goose chase as notable contemporary French references fail to cite that term. As happens in the evolution of language, minerality appears to have been simply made up, in the not too distant past, by someone who evidently found it to be evocative of flavor characteristics which lacked a suitable one-word description.

One study utilizing Chablis wines (Rodrigues et al., 2015, cited in Parr, et al., 2018) found at the core the words terroir, chalky, freshness and shellfish. Winemakers associated the word with soil (stone) as well as acidity, gunflint and salty whereas stone was the primary emphasis for consumers. Professionals appear to sense minerality as an aroma, both to the nose and in the mouth through the retronasal passages, and as tastes on the palate. Pros attach “a positive connotation to minerality, while some consumers expressed neutral or even negative connotations.” This raises the question of how tasting notes of wine writers referring to mineral qualities are being interpreted by drinkers, especially those who do not read wine publications on a regular basis. True aficionados may well be absorbing the language of the “tribe” and accepting minerality at face value as both objectively accurate and a sign of quality. If cult wine growers and famous critics embrace the term, why should it be questioned?

Aside from differing individual perceptions of minerality, the very idea at its core is in doubt: “Minerality cannot be the taste of minerals, geological or nutrient, in any direct, literal way” (Parr et el., 2018). It is true that soils are composed of minerals and that vines do require certain ones, taking up what they need. The nutrient minerals the grapevine draws in through its roots pass through various stages and are altered by the fermentation process as well as cellar treatments and aging in barrel. The volume of minerals in grape must ranges from 2.5 to 3.5 g/l, less than 0.5% of juice constituents (Fig. 1).

The final product – the finished wine – contains merely 0.15 to 0.20%, and 0.40% at the maximum, of inorganic constituents. Potassium is the most significant mineral. In specific cases, wine may contain atypical concentrations of sodium chloride – as high as 1,000 mg/l rather than the usual 10 to 40 mg/l – if vineyards and wineries are situated in close proximity to a saltwater sea (Moreno et al., 2012). Human palates may neither detect saltiness in (white) wine until it reaches 570 mg/l nor recognize its true origin below 4790 mg/l (Bastian et al., 2011). In coastal vineyards, salt may find its way into a wine as a result of sea breezes which leave sodium deposits on grapes. Plausible examples might include the Greek island of Santorini, known for its bone-dry, saline Assyrtiko-based whites and Sanlúcar de Barrameda in Andalucía, Spain, the provenance of Manzanilla Sherry. A specialist website, Sherry Notes, claims that “Manzanilla typically displays more coastal aromas than a Fino, like seaspray, salt or even iodine.” However, there is a dearth of publicly available data to confirm the sodium content of these and other wines from sea coasts.

Even less known is that sodium, calcium and heavy metals may be added to grape must and wine from other sources: irrigation, vineyard treatments, chemical residues, fining agents (i.e., bentonite) and filtration as well as the addition of sulfur as sodium metabisulfite (Moreno et al., 2012; Waterhouse, et al., 2016). This further undermines the causality argument claiming that minerals in wine are derived exclusively from those naturally present in rocks and soil.

While some tasters insist they are tasting minerals drawn up from the earth, the essential truth is that “the actual amounts of the minerals in wine are minuscule, and they are virtually tasteless” (Parr et al., 2018). If this is the empirical reality, the term minerality must be a stand-in for other flavor characteristics. There is still a great deal to learn and verify, but research findings to date are expanding our understanding of the complex sensory aspects. Grape variety could be one determinant. Riesling, Pinot Gris and Sauvignon Blanc wines have been found by tasters to be more “mineral” than Chardonnay – despite the supposed “mineral-laced” personalities of Chablis and other white Burgundies.

Salinity, as noted, is of particular importance and seems to be identifed in every trial. Elevated levels of acidity, both tartaric and malic, have been linked to the perception of minerality. If the malo-lactic conversion is blocked, entirely or partially, the unconverted malic acid could convey or reinforce a perceived mineral taste. Avoiding the malo is common practice with Riesling and some other white wines fermented in tank. In addition, succinic acid, a minor product of fermentation, is known to impart a salty rather than acidic taste and may contribute to perceptions of minerality. The role of pH remains to be proven unambiguously; yet, since low pH is a multiplier of acidic taste, it may well be another factor.

Also implicated is sulfur dioxide, especially free SO2 but also total (Parr et al., 2018). Sulfur compounds are present in wines found by tasters in studies to be “mineral,” notably polysulfanes and BMT (benzene methane thiol), linked by several researchers to wines described as having “flinty,” “gunflint” or “wet stone” odors (Tominaga et al., 2003). As geologist Alex Maltman has noted, flint – a type of silica – is by itself flavorless and odorless. “Gunflint” is used by some tasters to describe a certain aromatic accent – as in the “smoky” Loire Sauvignon, Pouilly-Fumé – yet this can only refer to the smell of striking flint to create a spark. The smell of a wet stone is actually petrichor, the organic or animal residue on its exterior. Sterilize a vineyard rock by soaking and washing it twice with distilled water and let it dry briefly; there will be little if any odor until “it becomes filmed with volatile compounds present in the atmosphere” (Maltman, 2013). Nevertheless, all of these odors could well be real rather than imagined; but that does not mean they are derived from minerals. The many factors which may act, together or singly, to accentuate or diminish the perception of minerality are laid out on the following diagram (Fig. 2). This should be seen as a template for discussion and further study, not the ultimate terminus. 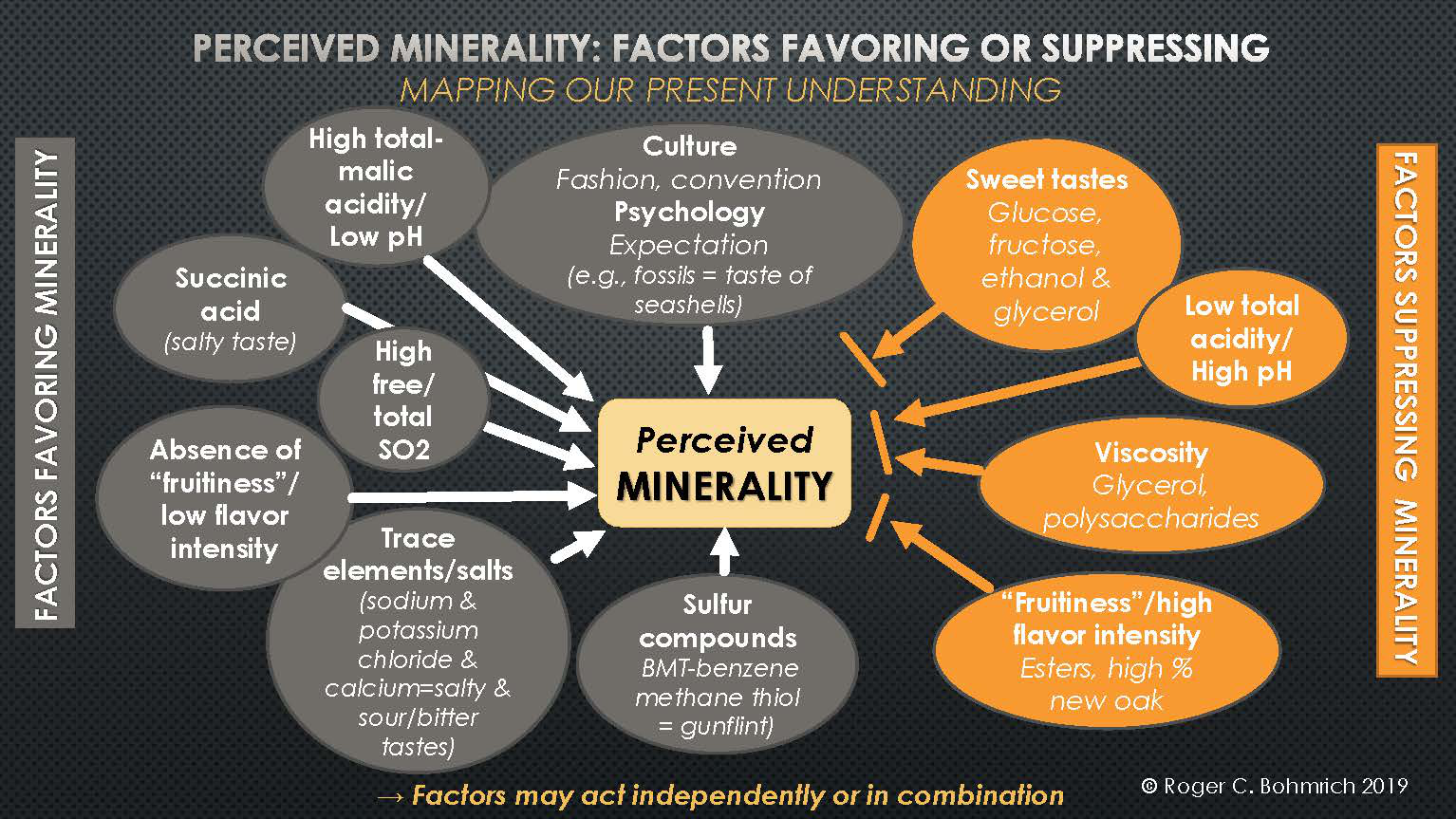 A professor of cognitive and behavioral biology has written that human beings “are incapable of being fully objective, even in our most mundane observations and impressions” (Koch, 2010). Sensory responses are among the most complex phenomena: they are governed by preconception, experience, our individual “hardware,” mood and health, and many other influences. Moreover, taste cannot be separated from culture, which encompasses language. We select arbitrary words – minerality among them – to express our multifaceted sensate impressions. Even if there are widely varying sensitivities and preferences, there are universal tastes: sweet, sour, bitter, and salty. Sourness or acidity, as we have seen, is linked to perceptions of mineral flavors, as is bitterness, albeit less consistently. Saltiness “appears to be associated with minerality in every conceptual study” (Parr et al., 2018) and is therefore at the core of the discussion of minerals and wine.

Minerality is a loaded term questioned by academics and defended by instinctive wine tasters. Many of those who see it as a valid descriptor take it literally: the actual taste of minerals in vineyards. However, wine is not water, which transports minerals “as is” from below-ground sources into bottles labelled Gerolsteiner® or S. Pellegrino®. Despite a lack of scientific corroboration, exponents find minerality to be an appealing and convenient term. Fortunately, there is an emerging understanding of this phenomenon thanks to new research, even if some may resist its findings.

Now that you know more about it, come explore the aspect of minerality with us every Saturday from 1-5 PM in out tasting room! See the calendar below for the upcoming tasting schedule.