Skip to content
Spain was just ranked the healthiest country in the world,
and the Mediterranean diet could have played a role
By Susana Vera
Bloomberg Insider 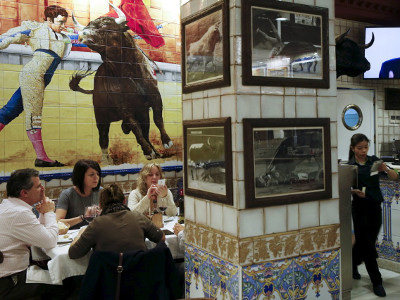 Spain was ranked the healthiest country in the world for 2019 on the Bloomberg Healthiest Country Index.

To create the ranking, Bloomberg looked at several factors, including life expectancy, tobacco use, clean water access, and obesity.

The popular Mediterranean diet could have helped Spain take its top spot. The diet has been shown to promote heart health and weight loss and lessen diabetes risk.

The Mediterranean diet sets itself apart from the ketogenic dietand paleo diet with its less restrictive approach to eating.

Bloomberg released its annual ranking, looking at a variety of factors across 169 countries, including life expectancy, tobacco use, clean water access, and obesity rates to determine which are the healthiest. Five other European countries made the top 10, including Italy, Switzerland, Sweden, and Norway, while the United States ranked 35.

Spain had the highest life expectancy at birth out of all of the countries Bloomberg ranked.

In the previous edition of the Bloomberg Healthiest Country Index, published in 2017, Spain was ranked sixth, while Italy was ranked first.

The Mediterranean diet has been shown to help with weight loss, promote heart health, and lower diabetes risk.

People from Spain and Italy, the top two healthiest countries for 2019, often eat Mediterranean-style diets, which could have played a role in their high rankings.

That’s because the diet, which is low in added sugar and high in healthy fats, has been shown to help with weight loss, promote heart health, and lower diabetes risk. The Mediterranean diet was even named the top overall diet of 2019 by US News & World Report for these reasons.

A 2018 study in The New England Journal of Medicine also found that diets featuring extra-virgin olive oil and nuts, two staples of the Mediterranean diet, could help prevent heart disease.

Other popular items on the diet include fresh fruits and vegetables, and even red wine in moderation. The eating style sets itself apart from other diets like the ketogenic diet and paleo diet, both of which suggest dieters eat mainly protein and fat and stay away from carbohydrates, with its less restrictive approach.

Diet alone probably isn’t responsible for Spain reaching the top spot on Bloomberg’s index since so many factors played a role in the methodology, but it certainly contributed to the country’s ranking.