Hundreds of thousands of visitors descend upon Milan each year to visit Leonardo da Vinci’s Last Supper but few people know that the artist left behind another noteworthy treasure just steps away from his famous fresco. Leonardo’s Vineyard, or La Vigna di Leonardo, lies tucked within the lush gardens of the Casa degli Atellani, an elegant private residence that provides a unique opportunity to experience the Milanese Renaissance. And on the eve of Leonardo da Vinci’s 500th anniversary of his death, 2019 is a perfect time to retrace the artist’s footsteps in the northern city. 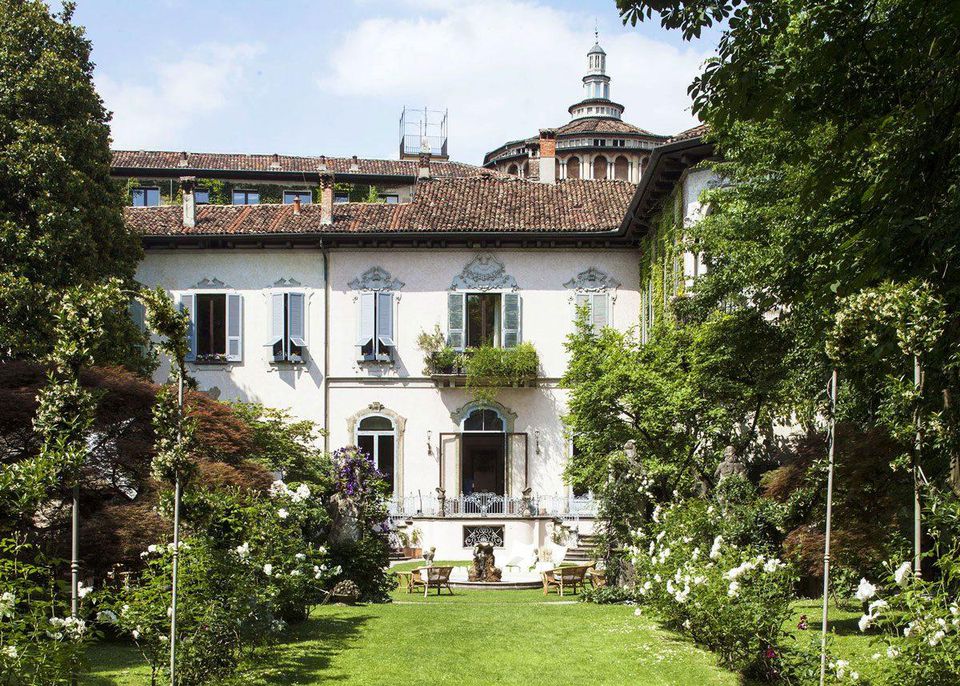 Originally born in the Tuscan town of Vinci in 1452, Leonardo was one of the most prolific and avant-garde masterminds the world has ever known. A veritable Renaissance man, his talents extended far beyond the fields of art and science to include astronomy, cartography, engineering, geology and even botany. He honed his skills in Florence before he moved up north in 1482 to work for Ludovico Sforza, the visionary Duke of Milan who would become one of Leonardo’s most important patrons.

The artist spent a productive period in Milan working on numerous projects for the Duke over twenty years. He engineered the city’s canal district, drew thousands of sketches preserved in his Codex Atlanticus notebook and painted The Last Supper (1495-1498), housed within the refectory of the convent of the Santa Maria delle Grazie church. To demonstrate his gratitude, Ludovico Sforza gifted Leonardo a small vineyard which the artist tended to while he painted The Last Supper. Leonardo himself hailed from a family of winemakers and took great care of the vineyard, even including it in his will at the end of his life. 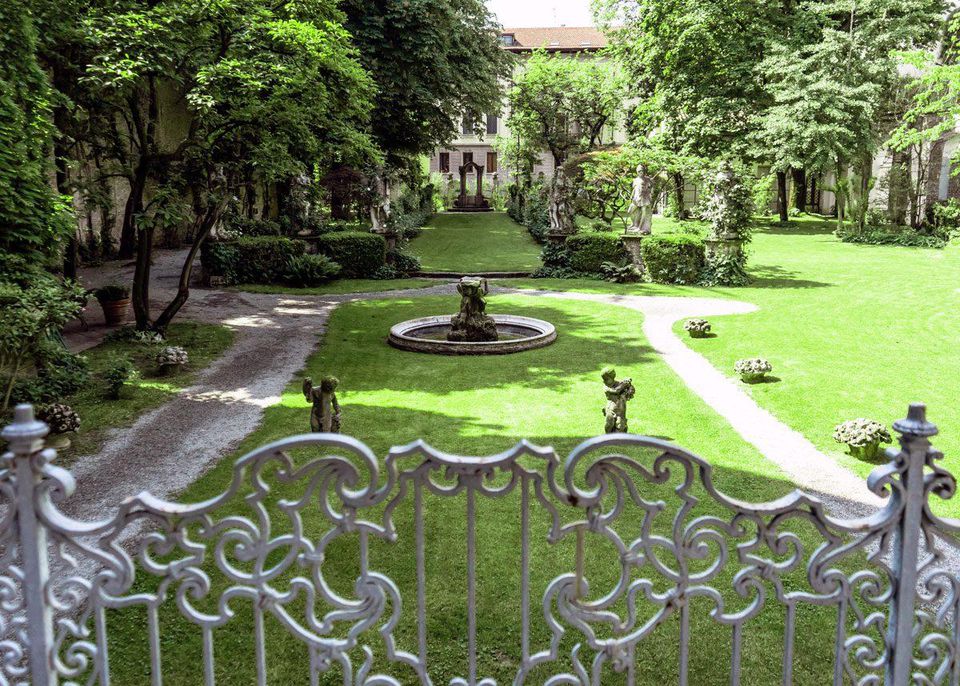 When French troops invaded Milan in 1499, Leonardo fled the city and the Casa degli Atellani – and his vineyard – fell into disrepair. The property suffered numerous fires and even bombings during World War II. It was later purchased by Ettore Conti, an engineer and magnate of the Italian electricity industry, and restored in the 1920s by the famed Milanese architect Piero Portaluppi. Remnants of the vineyard, meanwhile, lay forgotten to history until the Expo Milan spurred a cultural revival in the industrial city in 2015. Portaluppi’s grandchildren, current owners of the Atellani House, decided to recreate Leonardo’s vineyard centuries after his death. They worked together with oenologist Luca Maroni and the University of Agricultural Sciences in Milan to study the original grape variety, Malvasia di Candia Aromatica, and replanted the vineyard honoring the original pattern of the vines in the 15th century. 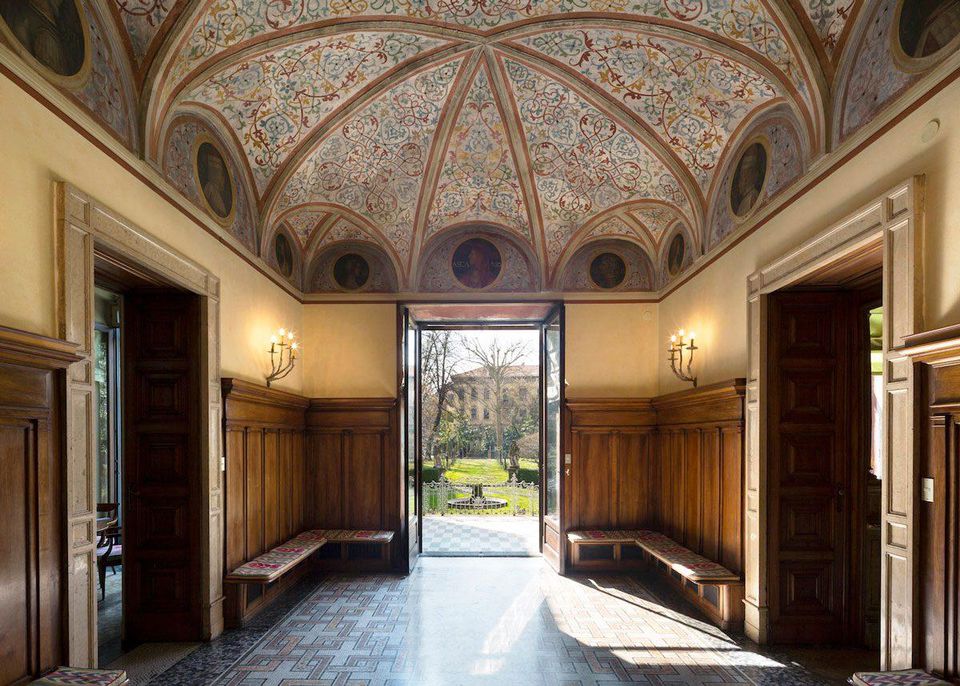 The Portrait Room inside the Casa degli Atellani

Today, travelers can experience the magic of the Vigna di Leonardo with a stay at the Atellani Apartments, a collection of six boutique apartments situated within the ivy-laden courtyard of the Casa degli Atellani. Steeped in history, the apartments were elegantly refurbished by Portaluppi’s grandson Piero Castellini Baldissera and his great-grandson Filippo Taidelli, underscoring the family ties that persist in the property. With contemporary amenities and bespoke furnishings by local artisans – including fabrics by C&C Milano (a textile company co-owned by Piero Castellini) – the apartments make a comfortable base for exploring the city and cater to short or long-term stays. Opt to stay in the Sforza apartment to enjoy privileged views of Leonardo’s vineyard and direct access to the private garden. As you wander among the moss-covered statues keeping watch over the vines, it’s impossible not to feel transported to another era.

You can also sample a taste of Leonardo’s wine while you’re on the property. The first harvest was held last year in collaboration with nearby Castello di Luzzano, a wine-producing castle where the Atellani family lived for a period. The Tasto Atellano, a fresh white wine made with Malvasia grapes, has a light floral scent and crisp citrus notes.

The Vigna di Leonardo is open to the public daily. Tours last 30 minutes and take visitors through the Casa degli Atellani and into the gardens. 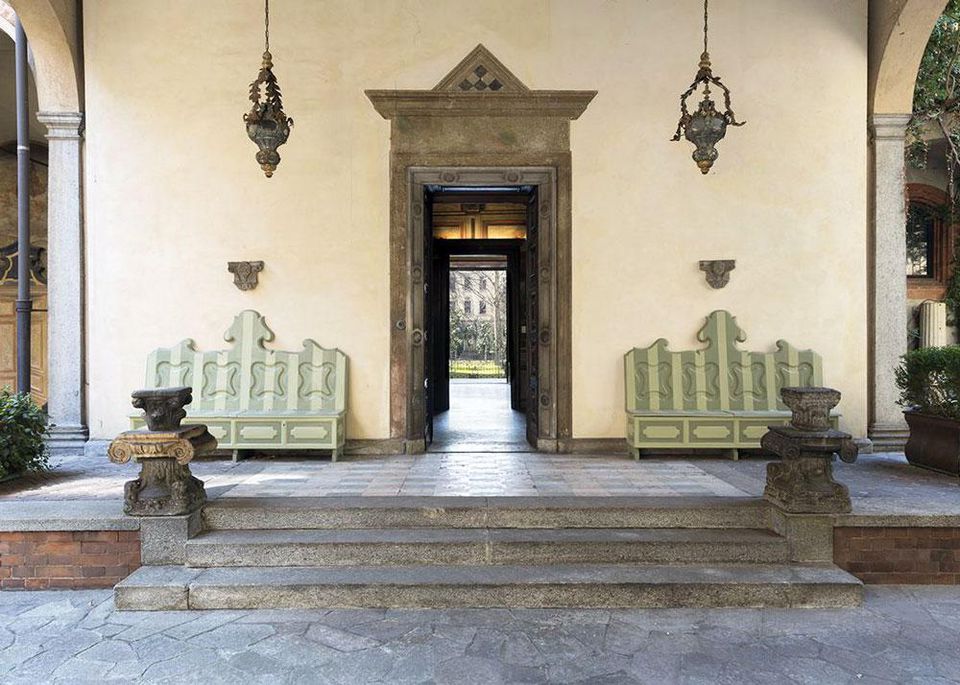 The entrance to the Casa degli Atellani museum