How Many Wine Grape Varieties Exist? 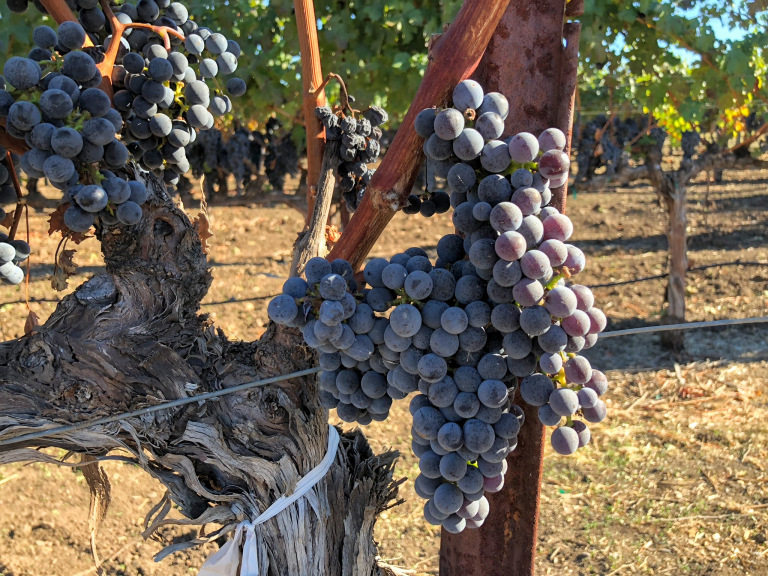 I became interested in what composed an often quoted 10,000 number for wine grape varieties. I was skeptical because that number was way too perfect and way too even for the total number of varieties to actually be correct. In a previous article, I point out various estimates range from 5,000 to 15,000 for wine grape varieties (including synonyms in one estimate): there is a big variance out there still.

I wanted to peek behind the curtain and see the source data. The data was in several locations and had not been unified in a format identifying all wine grape cultivars. And often cited resources is the Vitis International Variety Catalogue (VIVC) which list all grapes of all Vitis species including all crossings. But the peek behind the curtain did help to whittle down to the approximate and most accurate number but I had to create my own taxonomy of wine grape varieties which includes all Vitis species (vinifera, labrusca, aestivalis etc., and all crossings) to get the answer.  Today if you looked up on VIVC today : Vitis Vinifera Linné Subsp. Vinifera the output would be 12,893.  Voila it is not the accurate wine grape number because many entries don’t:

Though it may seem obvious but grapes can be utilised for the following and I have captured function/capability in my taxonomy per each cultivar if known:

Additionally, I have started to add clones per each cultivar. Needless to say it is a taxonomy that is never finished and a very large data set to manage.

I have reviewed VIVC, Native Grapes of Italy (D’Agata), Wine Grapes (Robinson, Harding & Vouillamoz), National Grape Registry (UC Davis) and other sources as well.  I have verified 10,170+ wine grape varieties (two thirds of this is Vitis vinifera)–obviously not all are grown commercially and many are kept in agriculture collections at universities and nurseries worldwide.  There are 31,000+ synonyms or 3.1 synonyms per variety.  A nearly Senate majority 61% (or at least a Senate Majority in the old days) do not have a synonym. 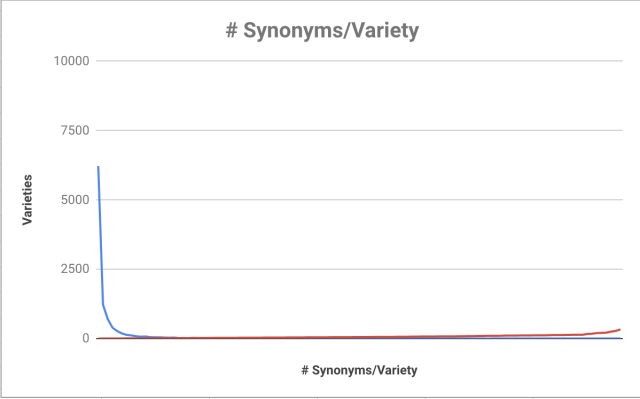 This graph shows that from left is showing (no synonyms) to right the most synonyms per variety. The curve is depicting the highest number of 6k+ varieties with no synonyms to the most Pinot Noir with 334 synonyms (the last data point)

Generally, the older the variety the higher number of synonyms is likely and there probably is no surprise that Pinot Noir as an example is the number one cultivar in terms of total synonyms: 334. The creation of synonyms talks about success of variety as well as the large distribution and even the name itself in many ways begs for a translation wherever you find Pinot Noir–basically and loosely translated from the French ‘Black Pine Cone’–this can easily translate since this is a description. In the German are Blauburgunder or Spätburgunder – blue Burgundy or Spät meaning ‘late’ ripening Burgundy grape to represent Pinot Noir.  Other grape names beg for either a name change or synonyms such as the following grape names: SEYVE VILLARD 10-319, GEILWEILERHOF 69-31A- 7, or DI ROVASENDA 4/5/3–though these are a part of a series of experiments and hence the non-compelling names–obviously if these were to be readied for commercial production a more consumer friendly name would be instituted.

Complexity of wine grape prime names as well as synonyms is truly a result of history: attempts to classify wine grapes with what knowledge that was available at that time. But such an effort to help and create clarity only promoted a confused state of wine grape names and synonyms that we still live with today. Without understanding things that would only be available to us today such as DNA analysis we might think that all Trebbiano’s are all related (thank you Romans for trying).  The goal of any taxonomy system is to seek clarity, to define all components, to have reference points and to keep this tool up to date.

The wine world is vastly complex and shows things in this taxonomy that results from two major events: 1) Phylloxera 2) Scientific agriculture. Phylloxera destroyed about 2.5 mm acres of vineyards in France hence the fever pitch of creating a wine grape to withstand Phylloxera became an industry. There are a number of wine grape series of created wine grapes which are very large series say the Seyve Villard or Seibel series and other created wine grape varieties (both Vitis vinifera and Interspecific Crossings are numerous).  At a minimum there are at least 1/3 of all wine grape varieties are created. The other reason is to create grapes for both earlier ripening, disease or pest resistance, increased yield etc.

So many wine grapes have been created but will never see the light of a wine bottle. When we attempt to engineer a wine grape we often don’t have success in creating the outcomes we would like–first and foremost taste–is it compelling? Does it ripen in the time frame needed? Is it disease resistant? I point to Marselan a cross between Cabernet Sauvignon and Grenache–the aim was for a wine grape variety with a higher yield per hectare. While some of it’s end points were meet it is not the wine that people are seeking. It is not the remarkable experience that perhaps Cabernet or Grenache is on it’s own.

While we can track both prime names of varieties and synonyms and there is still confusion today. Négrette is a French grape and here is why accents are vital–the accent aigu first “é” distinguishes from the synonym names of Negrette (no accent mark on first “e”) which represent 1 Spanish, and 2 other French grapes–all unrelated Négrette.

I have not uploaded my taxonomy and could some day envision that it is crowd maintained and/or a body that adjudicates wine grape names and synonyms and even assures list is accurate with bona-fide wine grapes and add more source data on all wine grape varieties.

As I mentioned earlier the grape name of Cabernet Pfeffer is listed in VIVC but there is no source material to understand if this grape really exists. For questionable citations a taxonomy should have guide rails to keeping the documentation up-to-date. I came across a wine bottle shopping in San Francisco and was produced by Ken Volk. There is an entry in Wine Grapes book by Robinson, Harding & Vouillamoz which questions its existence. I saw one review online and it just took this variety at face value that it exists. I find it hard to believe that the name of the farmer William Pfeffer named the variety after himself and oh coincidentally it is peppery?? Seems to be a bit hokey. Kenneth Volk had DNA testing on his Cabernet Pfeffer and it was Gros Verdot (and to also clarify that Gros Verdot is not related to Petit Verdot). The TTB has Cabernet Pfeffer in its lists of accepted grape names but not Gros Verdot. Perhaps Ken Volk tried to get his wine labeled as Gros Verdot but couldn’t get it approved??  I have tried to find reference material for Cabernet Pfeffer and I cannot find any to substantiate this variety has existed in the past or if it even exists today.

If a wine producer want to buy a bottle of Gros Verdot that is much more substantiated than the mysterious Cabernet Pfeffer. After the research I completed I did not walk away a satisfied consumer of the wine I tasted. After all you wouldn’t want a Tannat when you really wanted a Pinot Noir (even through it was labeled a Pinot Noir) right?

While nation-states and organizations like the EU act in the interest of the EU it doesn’t necessarily help the entire taxonomy to have integrity over time. I could see more of an adjudicating body to help keep correct naming up-to-date.

Wine as I have always said is enjoyable to taste and yet behind the curtains is the most complex consumer product in any market anywhere. Also be certain the wine grape number I listed here will change over time as well as the number of synonyms.