Robert Parker used to be a person. He was a man of strong appetites; he loved wine of course, but also rye whiskey, soft-shell crabs and oysters. He liked horror movies, especially grotesque ones, and the Baltimore Ravens. He was devoted to his wife and posted photos of her on every anniversary.

This sounds like an obit, but don’t worry Parker fans: Robert M. Parker Jr. isn’t dead yet. In fact, for $4000 you can have dinner with Parker on Nov 8 in New York at Daniel restaurant. Tickets are still available as of this writing.

If I had $4000 to spare, I’d go: the dinner features 17 wines from Parker’s own cellar, including 1986 Chateau Mouton-Rothschild, 1990 Paul Jaboulet Aine Hermitage La Chapelle and 2001 Shafer Hillside Select.

The transition has already started. Robert Parker, as a brand shares no more charming pictures of his dog (which was famously outed as being flatulent in “Mondovino”). Instead he advises us about three cocktails for the end of summer. I miss Parker the person; he was cantankerous at times and would rage about wines with too much acidity, but he was passionate and 100 percent human.

The real Parker maintained his own account (@RobertMParkerJr) for years, but on February 16, 2017, he posted his last tweet;: a photo of a bottle of wine. It’s a great last tweet, because the bottle in question is a $25 Napa Cabernet at just 14.2 percent alcohol (shut up Eurosnobs, that’s low for Napa Valley). Parker the man was always more interesting than the straw-man caricature who served as a whipping boy for sommeliers. 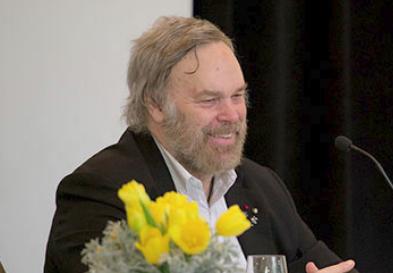 I’m surprised that the owners of the Wine Advocate haven’t convinced Parker to completely delete his account. What they want is for the wine industry to not notice that Parker has become a brand. So far, in the absence of an actual obit for Parker, it’s working beautifully.

Exhibit A: Mike Dunne, a veteran wine writer for the Sacramento Bee and a personal friend of mine (sorry about this, Mike) published a column this week about Adam Lee’s interesting new private-membership Pinot Noir company, Clarice. It’s a good column but there’s one error that has become commonplace in the wine industry.

Dunne writes that the first three Pinot Noirs under the Clarice label “drew high praise from wine critic Robert M. Parker Jr., who anointed each with between 93 and 96 points.”

But Parker has apparently retired from reviewing wines, and in fact those scores came from Lisa Perrotti-Brown, the Wine Advocate editor-in-chief.

It’s an easy mistake to make, because the Wine Advocate isn’t interested in boosting Perrotti-Brown’s profile as its lead critic, despite her credentials – she’s a Master of Wine (MW) and Parker is not. If you go to the RobertParker.com site to look at the Clarice ratings, you see the initials “RP” below the reviews. You have to click through to the reviews to see that Perrotti-Brown wrote them.

I could give hundreds of examples of this mistake, somebody saying “Robert Parker gave it a 93” when actually it was a different Wine Advocate critic. It’s like saying “Robert Mondavi’s best vintage may be 2016”, or “Carlo Rossi really makes a nice wine for the price”.

This is what the Wine Advocate owners bought: not just the Advocate title, but Robert Parker the brand. It’s possible that this brand will outlast its creator by centuries. This is not uncommon in wine.

For example, Pierre Pérignon was a brilliant innovator. In the 1600s, he started using corks instead of wood to seal wine bottles, and he used thicker glass to keep the bottles from exploding. We don’t remember Pierre the man, though, and whether he preferred boudin blanc or andouillette sausage is lost to time. We just remember him the way all Benedictine monks were called, by the honorific Dom.

Do you know the real name of François Clicquot’s bride by arranged marriage? It’s Barbe-Nicole Ponsardin. But you know her brand: widow in French is “Veuve.” She ran a Champagne house for 61 years at a time when few women worked in the wine industry. There’s a fine book about her business exploits, but her personality is lost to time: most of what we know about her comes from her accounting records, which survived.

We may forget his love of shellfish, but the good news is that it’s possible that Robert Parker has become immortal. Obviously drinking wine is good for your health!