Cami was the fifth child for Tom & Laurie Shelton – a very small 5-acre Howell Mountain project they purchased in 2001.  The property is managed by vineyard “Guru” David Abreu, who said that this soil was real “Cabernet Dirt’.

The family sold the grapes for many years, until Tom’s untimely death in 2008. It was then that Laurie decided to make some of her own wine and dedicating it to Tom’s spirit, and naming it for their last child “Cami”  The total production is a whopping 150 cases and the wine is made by Thomas River Brown’s long time assistant John Giannini at the Outpost Winery. 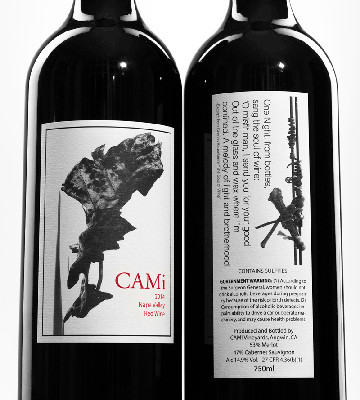 Opaque and garnet in color with a luscious bouquet of red and blue berries, balanced by rose petal and tobacco with a touch of smoke on the nose, this wine is rich, juicy, and dense in texture like chocolate and boysenberry pie with a hint of smoke and tarragon.

Parker 94 Points: “Composed of 53% Merlot and 47% Cabernet Sauvignon, the 2014 Red Blend displays a deep garnet-purple color with slowly evolving red and black currants, mulberries and underbrush notes with hints of new leather, charcuterie and exotic spices plus a waft of potpourri. Full-bodied, with a firm backbone of lively acid and firm, chewy tannins, it finishes long.”