So pull up a cozy chair and a glass of wine… 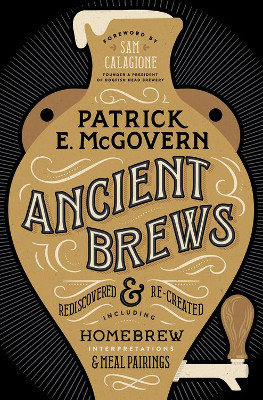 It’s easy to find cold brews on summer days, but here’s a twist: a journey back to the alcoholic beverages that people drank thousands of years ago.

Patrick McGovern, a renowned scientist and passionate lover of fermented beverages, brings the history of ancient brewing alive with this fun, tempting and thought-provoking book. McGovern is director of the Biomolecular Archaeology Project at the University of Pennsylvania in Philadelphia. For more than three decades he’s been a pioneer in archaeological chemistry — a field that combines old-school fieldwork with cutting-edge technology such as mass spectrometry and DNA analysis.

The new lab tools are able to identify the chemical makeup of astonishingly small beverage traces that remain on ancient artifacts, such as the stains on beverage containers found in the Egyptian pyramids. McGovern and other researchers then match the chemical fingerprints to various grains, fruits and spices, and come up with a kind of reverse recipe, brought to life thousands of years after the original beverage was originally consumed.

“Ancient Brews” is a geeky and tasty way to learn about ancient history, and the science of booze. McGovern explains the chemistry of fermentation, the molecular components of alcohol (two carbon atoms, six hydrogen, one oxygen) and how our love of alcohol probably originated more than 100 million years ago in the Cretaceous Period, when flowering plants appeared and fruit flies developed specific genes to process alcohol. (Humans still have some of those same genes, by the way.)

But McGovern isn’t entrenched in the past. The book contains numerous recipes for home brewers, created in collaboration with Sam Calagione, founder of Delaware’s Dogfish Head Brewery. There are also food suggestions based on archaeological findings, such as a lamb and lentil stew that was consumed around 800 B.C. at what was probably King Midas’ funeral feast in what is now Turkey.

The recipe for the accompanying beverage (also available bottled through Dogfish Head as Midas Touch) has some familiar beer ingredients (malt extract, honey and hops) but also twists: saffron threads and grape juice. That’s a theme in the book: McGovern shows that people had exotic tastes thousands of years ago, all over the world. They weren’t just chugging alcohol for the buzz, though that was certainly appreciated, perhaps originally in religious ceremonies.

Chateau Jiahu goes farthest back in time, to 9,000 years ago in northern China, where people made a beverage that combined fermented rice, grape juice, honey, hawthorne and orange peel.

McGovern’s mix of gee-wiz science and thoughtful historical context makes “Ancient Brews” a refreshing read, for the summer or any other season.