Eschewing traditional routes to a winemaking education, Ehren Jordan worked his way up the vertical integration ladder. After graduating from college in 1989, he left for Denver, Colorado where he worked briefly as a sales rep for a large wine distributor. But the siren song of ski season in the Rockies grew louder as winter approached and Ehren headed for the restaurant scene in Aspen. 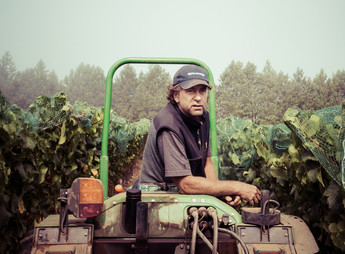 Schussing by day and bussing by night, our 21-year-old would-be winemaker went from wine steward to sommelier/manager by the end of the season. As the snows and drinking crowds melted, Ehren headed to the Napa Valley with a posse of associates from the restaurant on the first leg of what was to be an extended journey during the Aspen off-season. However, finding the funds low, our hapless hero presented himself on the doorstep of Joseph Phelps Vineyards looking for a temporary job as a tour guide…Three years later, after stints giving tours, working in the cellar, making sales calls with then VP Bruce Neyers, and managing retail sales, Ehren finally left Phelps to try his hand at winemaking in the venerable vineyards of the Rhône Valley. Celebrated oenologist Jean-Luc Columbo took a chance on the erstwhile Ehren, whom he had met the prior year. A Francophile since adolescence, Ehren threw himself into all aspects of what seemed like turn-of-the-century winemaking in age-old caves and endurance-sport viticulture on the terraced hillsides of Cornas. During the sodden 1992 and 1993 vintages Ehren helped make Les Ruchets, Columbo’s own label, and visited many of Columbo’s clients, among some of France’s most esteemed wine brains. After this of course he worked as the head winemaker of Turley and Neyers wineries, along the way starting his own “Failla” label with his wife Anne-Marie.

Failla 2014 “Hirsch” Pinot Noir, Sonoma Coast
Retail 95.00 – GGWC 89.99
FREE SHIPPING on 6
Use code FAILLA at checkoutGalloni 95 Points: “The 2014 Pinot Noir Hirsch Vineyard is a total knock-out. Dark, rich and explosive, the 2014 possesses magnificent depth and pedigree to burn. The flavors are dense, sweet and wonderfully nuanced throughout. A wine of extraordinary, almost Nebbiolo-like aromatic intensity and firm tannin, the Hirsch is going to need at least a few years to unwind, but it is very clearly a special wine. Hints of rose petal, mint and sweet red berry linger on the long, enticing finish.”Also, check out the 2014 Failla “Haynes” ChardonnayClick here or on the links above to order!