Friends,
I am sorry to let you know that Spottswoode founder Mary Novak has passed away. Mary was an icon of the Napa Valley who was admired and respected by all who knew her. She was one of the first women in California to run a large vineyard and winery when she took over the estate after her husband’s unexpected death in 1977. In the time since then Mary grew Spottswoode into one of the valley’s premier and top-caliber estates. Her presence will be sorely missed. 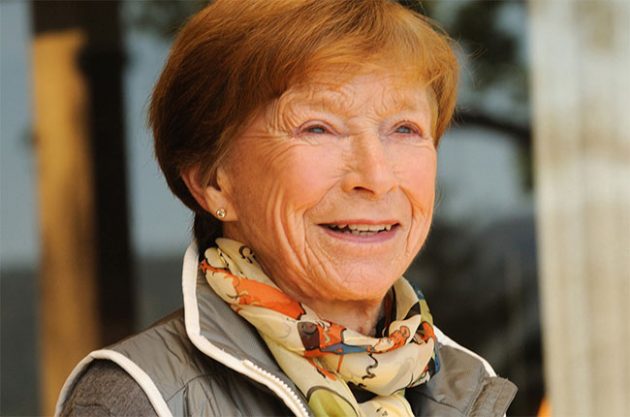 St. Helena, Calif. – Mary Weber Novak, the founder of Napa Valley’s renowned Spottswoode Estate Vineyard & Winery, passed away after a brief fight with cancer on Sunday, September 25. To many, Mary was the kind, energetic woman who zipped around St. Helena in her little electric red car, smiling at passersby. For those more familiar with the modern history of the valley and its wine industry, Mary also represented the spirit, graciousness, and vision that helped to build Napa Valley. As the founder of Spottswoode Estate Vineyard & Winery and one of the first women to run a major Napa Valley winegrowing estate, Mary was a vital part of the fabric of the valley and its wine community since 1972. Her intelligence, sense of humor, humility and vivacious personality will be missed.

Through her hard work, insight and perseverance, Mary was quietly instrumental in establishing Spottswoode as one of the valley’s great family-owned wineries and a first growth-caliber property. While doing so, she also helped to pioneer organic viticulture when she began farming the vineyard organically in 1985 (an approach that current Vineyard Manager and Winemaker Aron Weinkauf passionately embraces). Mary also played an integral role in championing women in the wine industry, in the example she set as a successful winery owner, by encouraging two of her daughters to work with her, and through supporting the hiring of several women winemakers throughout Spottswoode’s storied four-decade history, including Mia Klein, Pam Starr, Rosemary Cakebread and Jennifer Williams.

Mary was born in Los Angeles to Karl and Mary Weber on September 17, 1932. The middle of five children, she attended Marymount High School in Westwood. After spending a year at Dominican College, Mary attended Stanford, where she met her future husband, Jack Richard Novak, before graduating with a degree in education in 1954. After graduation, Mary taught kindergarten at St. Martin of Tours in Brentwood, before marrying Jack on June 16, 1956. Mary and Jack soon moved to Del Mar, San Diego County, where they began a family while Jack established a medical practice.

On a trip to Napa Valley with their five children in 1970, Mary and Jack fell in love with the rural beauty and relaxed pace of the valley. There, they discovered Spottswoode, an idyllic 31-acre property in St. Helena with already long-established vineyards and exquisite gardens. “I’ve always been a person who loves the land,” said Mary. “Walking in the gardens and through the vineyards, I knew we could make our home here.”

In 1972, the Novaks sold Jack’s medical practice and moved to Napa Valley. They immediately acquired an adjacent 15-acre parcel of land and began to replant their vineyard, which had originally been established in 1882. Sadly, on November 14, 1977, Jack, then just 44, suffered a major heart attack and passed away. Young, widowed and with five children to support, Mary recognized that the best future for her family lay in following through on their shared vision for Spottswoode. Mary took over management of the estate and successfully completed her first harvest, selling grapes to various Napa Valley families, including the Shafers and Duckhorns.

In 1982, after earning Spottswoode’s reputation as a source for some of Napa Valley’s most sought-after grapes, Mary hired Winemaker Tony Soter, founded Spottswoode Winery, and made Spottswoode’s debut 1982 Estate Cabernet Sauvignon. Three years later, on Soter’s recommendation, Mary began farming the Spottswoode Estate Vineyard organically at a time when the notion of organic farming was just in its infancy. After numerous highly acclaimed vintages in the mid-to-late 1980s, including three consecutive years with wines on Wine Spectator’s coveted Top 100 list, Mary stopped selling grapes to other wineries in order to focus exclusively on Spottswoode’s own wines—a decision that helped to establish Spottswoode as a benchmark of quality for over three decades.

Along the way, Mary was joined at Spottswoode by her daughters, Beth, in 1987, and Lindy, in 1992. Working together, they realized Mary’s vision of establishing Spottswoode as one of Napa Valley’s most esteemed multigenerational family estates, with a reputation for making some of the finest Cabernets in the world—culminating in a recent, historic tasting of all of the Spottswoode Cabernets since 1982 by Robert Parker of The Wine Advocate, in which he named Spottswoode “one of Napa Valley’s First-Growth Wines and Vineyards.” This is an amazing testament to Mary’s deep love of Spottswoode. Over the years, she succeeded in passing this love and her indomitable spirit to her five children and to her grandchildren.

“I have had the honor of working alongside my Mom for 29 years in helping her build Spottswoode into the incredible estate vineyard and winery that it is today,” says Beth Novak Milliken. “She had immense inner strength, an amazing spirit and love of life, and a dream that Spottswoode would continue through generations. This has become a part of me, and of my family, and together we embrace carrying her legacy forward by continuing to nurture this wonderful estate property, which we are so fortunate to be a part of. We are honored to continue the work which she, and our Dad, started when we moved here in 1972.”

Mary and her daughters made a commitment to stewardship at Spottswoode, adopting solar energy, spearheading the restoration of Spring Creek and contributing 1% of the winery’s gross profits on an annual basis to environmental causes through the winery’s partnership with 1% for the Planet, with notable contributions to the Land Trust of Napa County, Garden Conservancy, Yosemite Conservancy and the Trust for Public Land. In addition, in 2010, Mary and Beth served as Honorary Chairs of Auction Napa Valley, which supports numerous important Napa Valley non-profits, including many that focus on healthcare and education.

While Mary had stepped back from day-to-day operations in recent years, she continued to walk in the vineyard every day with her black lab, Riley, and tend to the estate’s historic gardens—as she had since 1972. Visitors to the legendary Spottswoode garden parties, held at Mary’s home, always received a warm welcome as she poured each a glass of her favorite Sauvignon Blanc. Active in the local community, she was a member of the St. Helena Catholic Church since 1972, the St. Helena Luncheon Group for more than 40 years, and The Garden Class, which was founded by Katie Trefethen, for over 35 years. Mary loved to play bridge, golf, and bocce ball. She also loved doing jigsaw puzzles with her grandchildren and friends and never missed daily Sudoku or the Friday Wall Street Journal crossword puzzle.

Above all else, family was most important in Mary’s life. She is survived by her five children, Lindy Novak (husband Jeff Lahr), Kelley Novak, Beth Novak Milliken (husband John Milliken), Mike Novak (wife Miel Novak), Matt Novak (wife Stephanie Novak), and nine grandchildren, John and Laura Streblow; Sean and Liam Milliken; Nicholas, Alexandra (Audie) and Lael (Poppy) Novak; and Casey and Claire Novak. Mary’s siblings include Nicholas Weber, of Santa Barbara, California, and Katrina Weber of Pune, India. She was preceded in death by her sister, Anne Porteous and her brother, Karl Weber. Mary had many friends and will be deeply missed by all, but special mention must be made of her friend, traveling companion and sister-in-law, Pat Novak, and of Sue Cross, who, with her family, has been an important part of the Novak family since 1961.

A celebration of Mary’s life will be announced at a later date. In lieu of flowers, the family is asking that donations be made in Mary’s name to The Land Trust of Napa County or The Trust for Public Land.