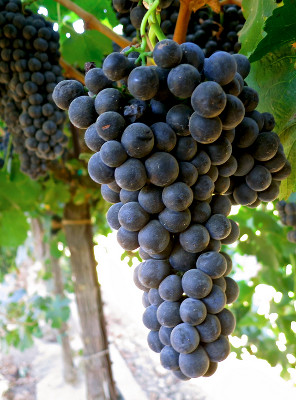 Can anyone tell me why California Petite Sirah doesn’t get more love from the cognoscenti? It certainly has some of the elements they love: It’s relatively obscure; it’s confusing; it pairs well with some hard-to-pair-with dishes. Is it the word “petite” that scares away macho wine dudes? Or is it the weird, Americanized spelling of Sirah, without the “y”?

Certainly the classic taste of tooth-staining, tannic Petite Sirah isn’t for everyone, but fans like me appreciate the deep, rich flavors and aromas of blueberry, spice, chocolate and sometimes even cedar or eucalyptus, markedly different from American Zinfandel and Cabernet Sauvignon. Mark Oldman, in his “Oldman’s Brave New World of Wine,” calls Petite Sirah “as dark and intense as a dominatrix’s boot.

What is Petite Sirah, anyway? Most of it is actually a grape called Durif, a cross between Syrah and Peloursin originating in late-19th-century France. Almost no Durif remains in France, but some it made its way to California, where it became a catch-all name for a number of grapes, some of which may have been Syrah. “They decided to give it a new name, including a French word for prestige, and something a bit easier to spell than Syrah,” wrote Roy Andries de Groot in his 1982 book “The Wines of California, The Pacific Northwest and New York.” These days, petite Syrah and Durif are synonymous, and California is its prime terroir.

Petite Sirah has always been used for blending. If a particular year’s zinfandel was a little flabby and in need of some tannic backbone or a darker purple hue, you can bet Petite Sirah was added.

I keep waiting for Petite Sirah to have its moment. In 2000, there were 60 producers of it. Today, there are more than 800. And more wineries are planting the grape: In 1992, 3,000 acres of Petite Sirah were grown in California; two decades later the total is nearly 8,500 acres. Many believe that the 2010, found on shelves now, might be the best petite vintage since it started being bottled as a single varietal in 1961. I figured it was a good time to do a tasting, so I gathered about 20 bottles, which wasn’t easy.

On a Personal Petite Sirah/Wine Note –  My wife and I met in July 1994, and the first bottle of wine we shared was a bottle of Vincent Arroyo “Estate” Petite Sirah. She told me that her girlfriends were drinking White Zinfandel! So I panicked – the “Wine Guy” could not be seen with a glass of “White Zinfandel” So after two meals in a restaurant, we had dinner at my place and the biggest red I had in my “cellar” was a Petite Sirah.  Now 22 years later (and still happily married) she does not care for whites, light reds or “whimpy” wines.  This girl wants the “full Monty” – BIG REDS!