Skip to content
Our tasting group rarely tackles Cabernet Franc, so I was very excited to review one of my favorite varietals.  Our panel selected some amazing wines:
The WINNER = WOLF 2012 CABERNET FRANC!

Since 1997, Jane and Doug Wolf have been stewards of the historic Inglewood Estate which is located at the base of the Mayacamas Range in the St. Helena appellation. The 30 acre property hosts just 6.75 acres planted to meticulously tended vines nurtured into wine of uncompromising quality. Karen Culler, winemaker, has led the wine program on the estate since the first vintage in 1997. 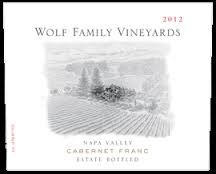 The 2012 vintage was textbook Napa Valley and counts itself along with the stellar vintages of the 2009 and 2010 wines. The 2012 Cabernet Franc has a rich texture and mid palate because of the fully mature and meaty tannins. The aromas are anise, blueberry, vanilla, and tobacco. The palate has the distinct oily mid texture characteristic of great Cab Franc. This wine exudes softness on the mid palate and extracted tannins on the finish, which is a luxury only found in Cabernet Franc. 95% Cabernet Franc, 5% Cabernet Sauvignon, 101 cases produced.