Skip to content
Steve Matthiasson is probably one of the most sought after vineyard managers in the Napa Valley. His current clients include Araujo Estate, Spottswoode, Chappellet, Hall, David Arthur, Stag’s Leap Wine Cellars, and many others.

Steve dreamt of farming his entire life. He became an obsessed gardener and cook while studying philosophy in college. In the early 1990s, while back in grad school studying  horticulture he found a vineyard job working for a small sustainable agriculture consulting firm. In 1999 he co-authored the California manual on sustainable vineyard practices. In 2002 he started consulting on vineyard practices in Napa. He still loves the challenge of solving vineyard problems for others, but since 2003 the primary focus has been on his own family farming and winemaking. Steve is a life-long student of the craft of viticulture. Steve  Matthiasson was named “Winemaker of the Year” in 2014, and that is an honor not given to everyone!  Steve meticulously farms his own vineyard at night and even on Sundays!  One of the nicest guys in the Valley, a quiet “rock star” of sort.  He is not noticed, but the wineries noticed him! 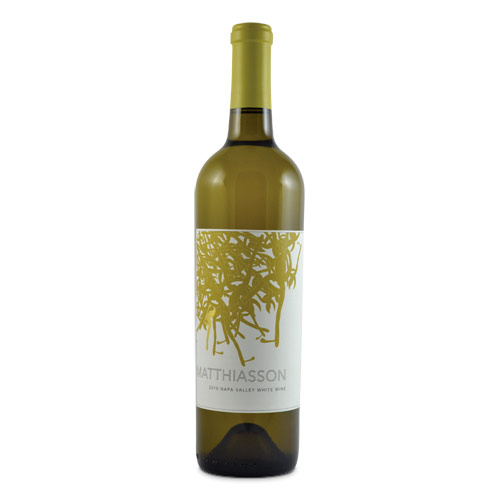 The 2013 Matthiasson White Blend consists out of 55% Sauvignon Blanc, 25% Ribolla Gialla, 15% Semillon & 5% Tocai Friulano. The Sauvignon blanc brings a clean fresh citrusy acidity and some tropical character. The Ribolla gialla brings seashell minerality, nuttiness, and structure to the blend. The Semillon contributes viscosity and waxiness that adds gravity and weight. The Tocai friulano adds spicy aromatic notes. The acidity and fruit expression is balanced by a rich lees character and a faint backdrop of creamy oak. There is interplay in the wine between lightness and richness, and focus and complexity.  Only 300 cases produced!